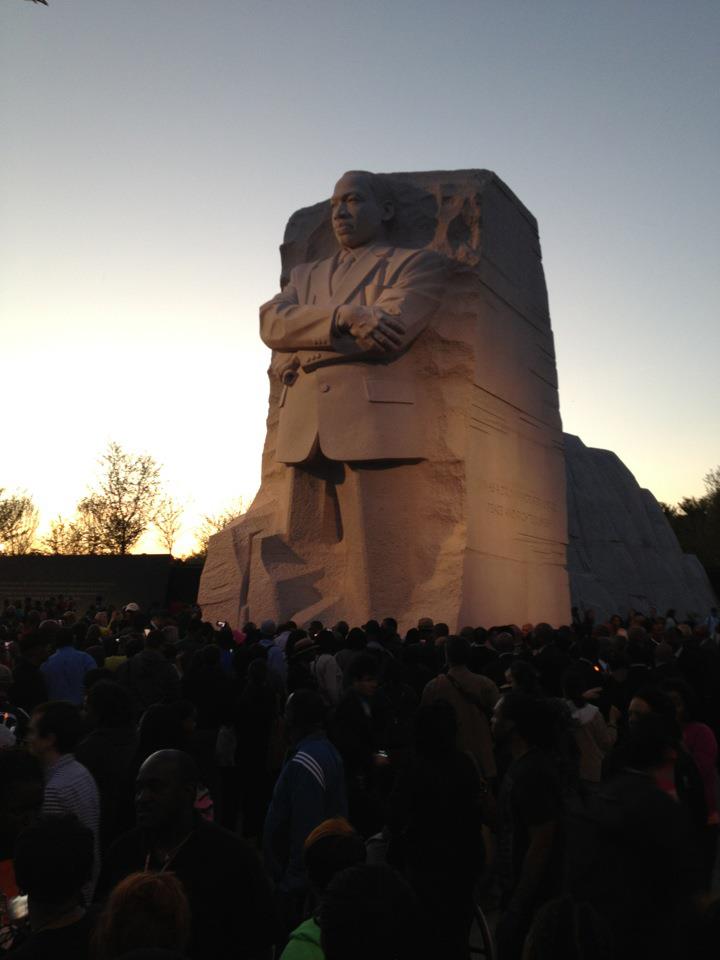 Tonight, I attended a candlelight vigil and celebration of Martin Luther King, Jr., at his memorial in Washington, D.C., facing towards the Jefferson Memorial at the Tidal Basin.

The grandeur of the memorial — which states "Out of the mountain of despair, a stone of hope on the side of MLK’s statue — must not obscure the ugliness and viciousness of racism not only in history but to this very day. Nor should it obscure the many courageous actions of Martin Luther King, Jr., including his insistence on the nonviolent path to social change, opposition to the Vietnam War, and insistence on social justice beyond racial justice alone.

At the celebration, I saw Dick Gregory, who is so friendly that one day several years ago when he heard me commenting happily to a friend on the phone that I had spotted him buying beets at the Silver Spring Fresh Fields, Dick walked right up to me and shook my hand, asking "How are you feeling?" Early on, he learned the power of humor in the fight to reverse injustice, which is remarkable when considering such struggles he endured as the following one when he was only nine years old:

"I used to shine shoes in a whites-only bar in St Louis," Gregory recalls. "One day I was cleaning this lady’s shoes. When you’re putting the sole dressing on, you have to put your hand behind the heel, to steady it. I heard this man say: ‘Take your hand off that white woman’s leg, boy.’ Then he kicked me in the mouth and broke my front teeth. The owner threw me out and told me not to come back."

Back to MLK, on nonviolence, he said:

The ultimate weakness of violence is that it is a descending spiral, begetting the very thing it seeks to destroy. Instead of diminishing evil, it multiplies it. Through violence you may murder the liar, but you cannot murder the lie, nor establish the truth. Through violence you may murder the hater, but you do not murder hate. In fact, violence merely increases hate. So it goes. … Returning hate for hate multiplies hate, adding deeper darkness to a night already devoid of stars. Darkness cannot drive out darkness: only light can do that. Hate cannot drive out hate: only love can do that.

When accepting the Nobel Peace Prize in 1964, MLK underlined that "unarmed truth and unconditional love will have the final word in reality."