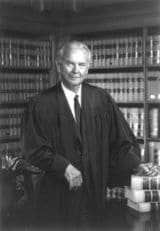 Though all people have their flaws, I was starstruck the only time I met this human giant, even as he sat in a wheelchair when he could not stand very long.

I remember my eyes popping out of my head when reading an account in my law school’s weekly newspaper of three law students who wrote a kind letter to Justice Brennan, and who received an invitation to join him for lunch at the Supreme Court. One of the invited students, who wrote the account, said one of the first things Brennan did was to offer to introduce the students to the other justices. He apparently was very well-liked as a person among most of his colleagues even when they vehemently disagreed with him.

This man who fought so fiercely on the Supreme Court, apparently always with a very kind public manner, had some very strong words in his private memos about Chief Justice Earl Warren’s successors. Sometimes the strength of the words came simply by quoting his colleagues, including this passage from part three of Mr. Newton’s series:

“In conference, as the case history notes, the justices squared off to their familiar positions: Brennan believed the Constitution extended equal protection to all people, including children of undocumented immigrants. Marshall sided with him. Burger confusingly compared the right to an education with the right to receive welfare (“as if that was the issue,” Brennan’s history of the case notes grumpily), but White joined the chief justice. Blackmun and Powell joined Brennan’s side. The most startling remarks, however, came from Rehnquist. He emphasized that many of the children demanding an education were not 5 or 6 years old but, rather, those who’d come to the country on their own. At conference Rehnquist referred to those undocumented immigrants, shockingly, as ‘wetbacks.

“[Justice] Marshall had heard his share of slurs over the years–much of his career, after all, was in the practice of NAACP law in the Deep South, below what he called the “Smith and Wesson line.” But to hear such an epithet in a conference of the U.S. Supreme Court was more than he could bear. Marshall exploded at Rehnquist, who lamely attempted to defend himself by saying in his part of the country the term wetbacks still had “currency,” as Brennan recalled it. Marshall fumed that by the same reasoning, he’d long been called a nigger.”

Rehnquist’s wetback comment comes in the context of his checkered past with race relations. In 1964, he testified against a ban against discrimination in Phoenix public accommodations. During Rehnquist’s 1986 Senate hearings on his nomination to become chief justice, he denied witness testimony that in the early 1960’s, while in private law practice, he went to voting places and harassed black and Latino voters by asking if they were qualified to vote.

Back to Justice Brennan, access to his papers remains limited. As author Jim Newton says:

“Many of [Brennan’s] papers–including a set of extraordinary annual memoranda documenting the court’s work from the perspective of Brennan’s chambers–have been largely kept out of public hands, stored at the Library of Congress but protected by conditions Brennan placed upon them and yearned for by scholars. Before he died, however, Brennan’s son, William J. Brennan III, allowed me access to his father’s papers, including those memoranda. They are a historian’s trove.”

“What’s notable about [Newton’s series on Brennan], beyond the actual substance of the reports, is that the revealed papers come from someone other than Stephen Wermiel, Brennan’s official biographer. Wermiel, an American University law professor and former Supreme Court reporter for The Wall Street Journal and Boston Globe, has had what was thought to be exclusive access to all of Brennan’s papers and has worked on the biography for a decade. His critics have wondered when he’ll finally hit the send key. Until he does, Brennan’s papers evidently will continue to dribble out.”