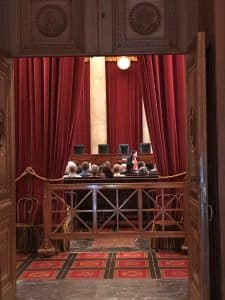 Brett Kavanaugh’s bid to join the United States Supreme Court should be denied. This is the second of a two-part article. See part one here.

Virginia criminal lawyer knows that a “no” vote on Kavanaugh may not prevent a severely rightward SCOTUS tilt, but might make the confirmation process more honest and less divisive

The contrast is staggering between the swiftness with which the Senate Republicans are moving the vote for Kavanaugh versus their barring any Senate consideration of Garland.

Federal judges do not ascend to the courts apolitically, and president Trump has both vowed to appoint conservatives judges and overly relies on the private conservative Heritage Foundation for recommendations for judicial nominees rather than listening to a broader cross-section of people. A Supreme Court nominee in this political climate should not expect to have a nomination process with smooth sailing.

Yes, most Supreme Court justices could earn a lot more money in the private sector, but the unparalleled experience of being historically among the small group of the nation’s Supreme Court justices will make plenty of talented lawyers willing to endure the short period of opposition party grilling before the Senate Judiciary Committee to reach a SCOTUS seat.

Whether or not Judge Kavanaugh realized that his nomination would draw accusations of such vile behavior as Professor Christine Blasey Ford’s allegation of sexual assault when Kavanaugh was still in high school and Deborah Ramirez’s allegations of Kavanaugh’s exposing his penis up-close to her when he was a Yale undergraduate, and whether or not those allegations are true, any time a Supreme Court nominee is likely to markedly shift the court’s ideology, that nominee should be ready for a grilling.

Virginia criminal attorney on the allegations against Brett Kavanaugh

I have insufficient information to know whether Judge Kavanaugh did or did not commit such despicable acts, and therefore am unable to say that those allegations should disqualify him as a judge. I have insufficient information to believe that Kavanaugh lied to the Senate Judiciary Committee about anything, whether about those sexual assault allegations, nor the meaning of the words in his high school yearbook posting. I am not inclined to urge a more thorough FBI investigation into him, preferring to leave the FBI to other pursuits.

Nonetheless, despite any intention or not by Senator Diane Feinstein or others to bring the Kavanaugh hearings beyond the upcoming Senate elections that might then make Kavanaugh a weaker candidate, Dr. Ford’s and Ms. Ramirez’s allegations coupled with Kavanaugh’s stark denials merited at least hearing from more witnesses on the matters than merely Dr. Ford and Judge Kavanaugh.

Fairfax criminal attorney on the September 6 vote on Brett Kavanaugh

Judge Kavanaugh is scheduled to be voted on in only a matter of hours, and the conventional thought is that he is now a shoe-in to win at least 51% of the Senate vote, which would mark him as having come to the high court through a very divisive process.

If Judge Kavanaugh is not voted into the court, Trump’s next nominee will not necessarily be any better ideologically, but at least the process of considering the next Supreme Court nominee will hopefully be more transparent and thorough. Of course, a Democrat-controlled Senate could make it tougher for a more extreme conservative ideologue to garner a Senate majority vote.

I have neither done a survey of Kavanaugh’s judicial opinions, nor have I found anything on the ACLU nor Alliance for Justice’s websites (where I would expect to see some of the most thorough coverage of him by the opposition) to alarm me about Kavanaugh beyond my expectation that a Supreme Court justice Kavanaugh will indeed materially shift the court rightward (which does alarm me, at least as it applies to civil liberties and criminal justice issue), as is likely with any Trump nominee, at least while the Senate remains Republican-controlled.

Senators- Vote no on Brett Kavanaugh

Acknowledging that picking a Supreme Court justice is not an apolitical process, I urge every single senator to vote no on Brett Kavanaugh’s candidacy and to start anew, with sufficient deliberation time and hopefully with a candidate displaying better temperament to serve on the nation’s highest court.

Virginia criminal lawyer Jonathan L. Katz has successfully defended thousands of people accused of felony, misdemeanor, and DUI violations since 1991. To discuss your case with Jon Katz, please call his staff at 703-383-1100 to schedule a confidential consultation.