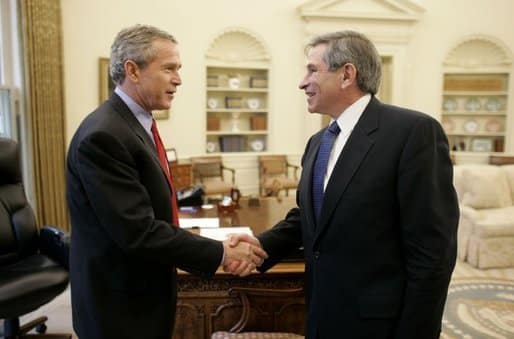 Washington’s no place to live or work if you’re going to lose your lunch every time you pass by a neocon. (Image from White House’s website).

With Paul Wolfowitz much in the news over allegedly using his World Bank leadership for improper favoritism for his companion, here is a brief overview of my short interactions with Mr. Wolfowitz, and my avoidance of his fellow neoconservative Dick Cheney.

I twice bumped into Paul Wolfowitz at the Bethesda YMCA around 2000, before he returned to government with the Bush II administration. He was a gentleman and a good listener, even after I told him that I let my prejudice against Reagan flow to him when he served under that administration. He did not seem bothered by my view, and was happy to tell me of his own, including how much he supported Reagan policy in the Philippines (during which timeframe?). I did not know at the time that Bush II would win the presidency, and would make Wolfowitz such a key player in Gulf War II.

Four years later, I attended the 2004 National Rifle Association convention in Pittsburgh, to figure out where the NRA fit with my strong support for robust Second Amendment protection, and to get a closeup view of firearms and firearms trends, seeing that part of my criminal defense practice includes weapons defense. I left the meeting recognizing more than ever how much the NRA loves a presidential administration (Bush II) that I do not, and how much the NRA promotes hunting, when I am an eighteen-year vegetarian for ethical reasons. Cheney was the keynote speaker prior to the main dinner event, so I vacated the convention center, not wanting to have anything to do with him. Two years later, Cheney accidentally shot Harry Whittington while hunting. I joined the NRA prior to this convention, asked the group to stop soliciting me for a membership renewal, and did not renew.

I first relocated to Washington in 1986 during a presidential administration with which I deeply dissented. Now, twenty years later, the situation is at least as bad. Jon Katz.