Sep 27, 2010 Congress and Obama recognize the dangers of libel lawsuits – May everyone else do the same 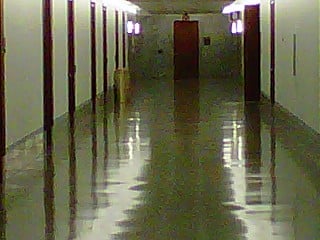 Kafka could not have created a more faceless symbol of the government: The view on entering the Dirksen Senate office building to the SPEECH Act celebration one flight up in the Senate Judiciary Committee hearing room. (Photo by Jon Katz.) 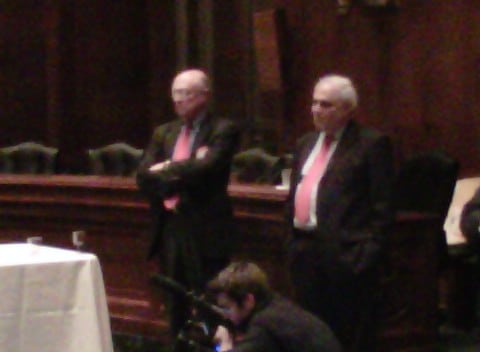 James Woolsey and Richard Perle. Did they support the SPEECH Act only for its advancement of their national security agendas? (Photo by Jon Katz).

Many colleagues ask me why I get so worked up against libel lawsuits. Some point out that libel does not involve pre-publication censorship and thereby have a problem getting too upset about such suits.

My replies that libel suits are an affront to free expression and the First Amendment often fall on deaf ears. Instead, I often illustrate my point, including:

– Too many activists get silenced and muted by groundless and oppressive SLAPP/libel suits, where the suing corporations/organization knows that the suit helps neutralize the defendants both through litigation costs and keeping the defendants in court and depositions when they might otherwise be picketing an allegedly rogue organization. The public loses out when activists who would otherwise serve social justice stay silent for fear of libel suits.

– Libel laws can easily get out of hand with excessive jury verdicts (fortunately, American trial and appellate courts will sometimes, but not always, whittle down such jury verdicts), including Britain’s gross hospitality to libel plaintiffs, Singapore’s rulers’ penchant for successfully prosecuting opposition politicians for criminal libel, and Turkey’s criminal libel law (Article 159 of the Criminal Code) that penalizes written insults to the military, the state, parliament and the judiciary.

Now, I have another response: None other than around nine state legislatures and the United States Congress, in the below-described SPEECH Act, have passed legislation prohibiting the monetary enforcement of overseas libel judgments without the plaintiff’s proving that the defendant was protected no less in the overseas court than if the libel case had proceeded in a United States court.

As skeptical as I ordinarily am about accepting invitations to gatherings featuring elected officials “- expecting an absence of a meaningful question-and-answer period, at the very least “ I was intrigued by a recent invitation celebrating the passage of the above-referenced SPEECH Act, formally known as H.R. 2765, Securing the Protection of Our Enduring and Established Constitutional Heritage Act. See the Act’s full text here. I figured that the event was only six subway stops from my office, so if the event turned out to be a dud, I would not have over-invested my time. So I went.

True to my expectations, there was no question-and-answer period.  Nevertheless, at the gathering, I learned about the overlapping efforts of those focusing on national security and perhaps some others more motivated by free expression rights to pass the SPEECH Act. At the forefront of pushing the SPEECH Act was Rachel Ehrenfeld (see here, too), leading an apparently Quixotic effort with no substantial bankroll nor sophisticated lobbying team.

It seems that Ms. Ehrenfeld jumped with both feet in pushing the SPEECH Act and various state versions of the legislation, as a result of a libel suit in the United Kingdom against her writing(s) about Saudi sources of terrorism funding, which suit is detailed in the video above. The U.K. is so hospitable to libel plaintiffs that several speakers at the gathering repeated the phrase libel tourism for the popularity of people from overseas to head to British courts to pursue libel suits.

So there I was in a surreal gathering of around sixty people, with First Amendment defender Floyd Abrams on the one hand, and national security sorts in the persons of James Woolsey and Richard Perle on the other. In the midst of it all, I saw hope for more people in the United States to understand the dangers of libel lawsuits wherever they are filed, whether domestically or abroad. Also, through Rachel Ehrenfeld, I heard a living example of someone doing what Ralph Nader told a bunch of law students soon after I began law school: Key pieces of legislation can come from two people drafting it at a kitchen table. Skilled lobbyists and big budgets might help push through legislation, but it is not the only way.

On my way to the Union Station subway stop, I passed by a sign at the station for a private ACLU gathering celebrating the group’s ninetieth anniversary. I do not know if I missed the date in this day and age of information overload, or if the organizers had simply overlooked inviting me. I learned that the ACLU gathering also had some elected officials there. Even there, where I would have expected the ACLU to push for a question-and-answer period with the elected officials, there was none. I arrived after the politicians had already left.