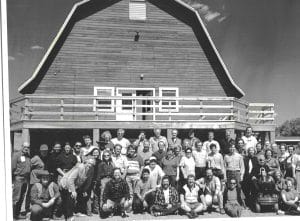 Dax Cowart (enlarge here) is to my right, and I (with a mop of pre-gray hair) am below the third person in back from the right. (1995).

Dax Cowart exemplified how an everyman can experience the most excruciating pain, transcend the pain, remain a true human, and scale great heights. He passed away two days ago, around seventy one years old.

In 1995, I arrived at Gerry Spence’s Dubois, western Wyoming ranch, where four dozen of us attendees remained an entire month at the Trial Lawyers College, miles from the nearest paved road, and many more miles than that from the nearest small town.

As much as I have written about my dissent from some directions the Trial Lawyers College took, it is undeniable that my experience there was essential. Few opportunities exist where we can drop our guards and veneers on the first or second day after we meet a bunch of total strangers who we will be with for a whole month, set aside whether or how this time investment and opportunity cost will pay off financially and professionally, and work together to help each other get in touch with our true selves — with the pain and joy that comes from that — and to encourage each other to rise together.

Dax was one of the first people I met at the ranch after getting off the bus that picked us up at the Jackson airport. Over two decades earlier, Dax had suffered burns to his body so severe that he asked the first person who found him after an explosion accident to get him a gun to end his life, seeing himself as a dead man. In those days before the right to die and right to refuse treatment movement had gained as much momentum as by now, the opposite happened. Against his will, he was given treatments that were excruciatingly painful, to say the least. Dax lost his eyesight and fingers. He did not, however, lose his spirit, even though his spirit was extremely challenged at the time.

Dax’s father also was caught in that explosion, when a leak of odorless gas from a nearby rusted pipe led to a ball of flame as they tried restarting their car that had stalled. His father did not survive the tragedy. Dax is well known in the right to die movement, and his tragic and fascinating story is covered in this and other documentaries.

Dax seemed to have no regrets that he wanted to die at the time he was in excruciating pain, nor any regrets at being alive once the pain from his burns had subsided.

One day when I asked a Trial Lawyers attendee how he felt about this world that still has so much racial prejudice and other bigotry, so much injustice, and so much inhumanity, he said: “Look at Dax, and what he has overcome.” He was right.

As much as Dax has inspired so many over what he has transcended with all his challenges, Dax has inspired me most not by his physical handicaps, but by his greatness that has no essential connection to those handicaps. He was truly a very real man, with no pretenses, no proverbial fences, and no Shirley Temple rosie-eyed approach to life. He sang a great interpretation of Johnny Cash’s “Bad News”. He and fellow ranch attendee Mark Delphin taught me the great song “Jambalaya“. Dax’s very person and persona were a song in a story and a story in a song, with the ups and downs, and the detours and challenges. One of our teachers at the ranch John Johnson — then in remission from cancer and spending the month away from his family — presented the Velveteen Rabbit as how necessary and powerful is to be real and to discover our realness, and Dax was the essence of that realness without ever needing to read a page of that book.

At the ranch, Dax delivered a superb cross examination, not only turning the entire exercise into a persuasive story for his client, but becoming indistinguishable from his persuasive story. Not long after the month at the ranch, Dax joined my roommate Bob Hilliard’s law firm, and proceeded in his first jury trial to obtain a multimillion dollar jury verdict, where during his closing argument he sang from Bob Dylan’s “Girl from the North Country,” (min. 10:35), not something that many lawyers could pull off and sound genuine, but that was true Dax. As recounted by Alice Steinbach, prior to the trial date, Dax and his co-counsel John Flood visited the courtroom and “walked the length and width of the room. Dax sat in the jury box and in the judge’s chair and on the witness stand… They arranged a series of mats for Dax to stand on: each one would serve to position him in front of a witness, the judge or the jury.”

We all walk this earth for a short time, but that does not diminish my sadness over Dax’s passing, nor my smile and warmed heart thinking about him. Deeply thanking and bowing to Dax Cowart, 1947-2019.