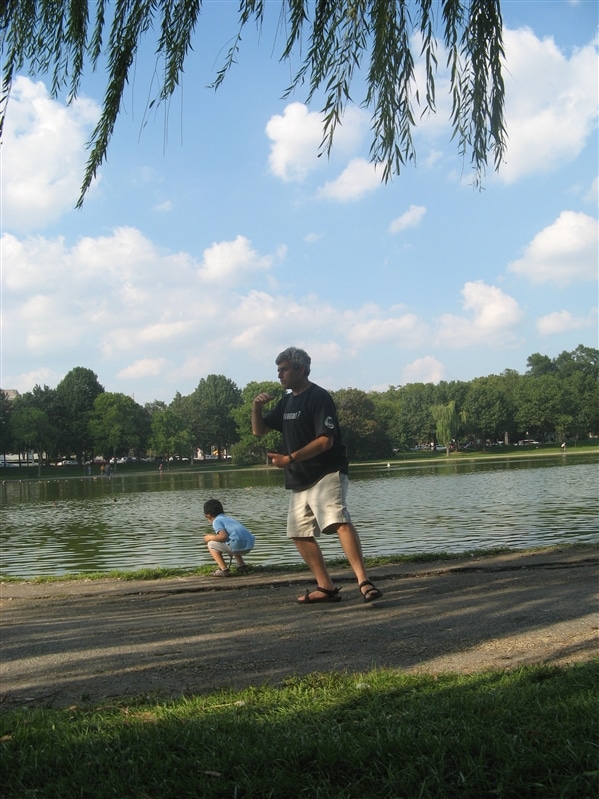 UPDATE (January 13, 2017): Law school began my decades of bouncing back and forth between good shape and flab shape. In the end, the best time-tested way for me to maintain an optimum weight while eating healthfully is to eat raw vegan when alone, and sensible portions of healthy cooked vegan when with friends and family on the weekends. This way, my eating approach is satisfying, and thus not a matter of feeling deprivation, whereby deprivation puts one at risk of boomeranging into bouts of overeating.

As much as I believe that the United States and the rest of the world are overmilitarized, over-triggerhappy, and overviolent, a combat veteran is all the more prepared for the challenges that constant trial battle brings to one’s physical and mental health.

The dovish person that I am, I opt for daily t’ai chi practice as part of my approach for keeping powerfully calm in the eye of the storm. When at my best, I do t’ai chi shortly after waking up, to be better prepared for any bows and arrows coming my way as early as the beginning of the day, and I do t’ai chi at night to get a better night’s sleep and day’s resolution after dealing with all the day’s bows and arrows, including those that I have shot myself.

The health of trial lawyers is constantly tested by drafty  and cold-producing courtrooms, windowless jails with inhospitable visiting hours, merciless court filing deadlines, constant battles, taking care of existing clients and law office administration while in trial for multiple long days (sometimes hundreds and even thousands of miles from one’s office), and the list goes on.

The elementary foundation for keeping healthy as a trial lawyer or in any other life path is an easy-to-apply balance of good diet, rest, and exercise. For whatever it is worth, here are some things I have learned about doing so:

Getting a good diet.

Before law school, I tended to fluctuate between the right weight and being up to five or ten pounds overweight. Starting with law school right up to a few months ago, I have battled the stomach bulge of ebbs and flows between just right and just plain wrong.

Unlike college, at law school I prepared all my own meals and was in just one law school building rather than a sprawling campus that required plenty of walking each day. Two years later, for ethical reasons, I stopped eating meat, fish and fowl entirely for the rest of my life. The Atkins diet followers probably speak much sense about being able to keep weight down by eating plenty of meat and few carbohydrates, but the heavy meat eating is not good for the health of the animals being slaughtered and eaten, likely does a number on one’s heart and overall health (including from all the growth hormones and antibiotics infesting meat, contamination and rancidity exposure in meat, and mercury infested fish), and does not seem to provide sufficient balance from non-meat food sources.

In mid-2001, I became a 99% raw vegan. This article talks about how I quickly shed and kept off excess weight.

Four years later, in 2005, I tried to see whether I could maintain my weight by reintroducing some cooked food to my eating. I ebbed and flowed back and forth weightwise, including some excessive weight gains for nearly the next five years.

Over one and one-half years ago, I cut out rice, pasta and bread from my eating. I still often got too heavy. Then, around two months ago, I eliminated dried fruit and packaged juice, which have too high concentrations of sugar. I substantially reduced my intake of nuts, seeds, and tofu. The pounds shed, and within two to three weeks, I was satisfied with eating this way.

When I was a 99% raw vegan, I ate substantial amounts of dried fruit, raw nuts, raw seeds, raw tahini/sesame seed butter and raw almond butter. Some raw foodists get very hardcore about defining what is raw, and it appears that most or all nuts and seeds require some heating to remove shells, unless some very hard labor is performed to do the whole task by hand. When a 99% raw foodist, whenever I saw myself exceeding optimal weight, I reduced the fat I ate, and that did the trick.

Many factors lead to overeating and getting overweight. One theory is that the body keeps sending out hunger signals until one consumes a good amount of essential nutrients found in vegetables and other foods. Consequently, if a person tried eating just bread and milk for nutrition over a one-week period, the person might gain plenty of weight.

Possibly an ideal way to maintain a good diet is to have a personal chef who purchases the ingredients for one’s every meal, and prepares and presents the meal to the eater. Such an approach can be expensive, and is impractical for those who eat lunch on the run on trial days, and who do not get home on time to eat dinner.

It is important not to binge on food. The temptation to binge can be reduced by not skipping breakfast, lunch and dinner; by eating smaller amounts more than three times daily; by avoiding eating within two hours before going to bed, when the metabolism might be less likely to go to work much on one’s late-night eating; and by eating lightly at night. If one craves unhealthy food or too much food, the craving is likely to subside by waiting at least an hour after feeling the craving.

My t’ai chi teachers were taught by students of Cheng Man Ch’ing, a t’ai chi superstar who apparently had a stomach paunch for many years before he passed. One of my teachers said that it is better to do t’ai chi than to have a perfect physique to behold. At the same time, senior Cheng Man Ch’ing student Ben Lo is svelte at around 84-years-old, and my teacher Julian Chu —- who studied with Ben Lo —- also has no paunch, and makes the time both to be great at t’ai chi and to run marathons.

For me, it is very important to do both t’ai chi and to get aerobic exercise. I emphasize getting sufficient t’ai chi practice each day before turning to aerobic exercise. Nevertheless, it does not take much effort to add aerobic exercise through such approaches as taking the stairs instead of the elevator, parking farther from one’s destination, and taking a walk during lunchtime.

Consider all the non-work and non-family-time ways in which one spends time that could instead be replaced by exercising, including couch potato time and too much time in front of the Internet. Thankfully, we have opted for no cable or broadcast television at our home.

Getting good rest and staying asleep.

Ideally, one will get enough rest simply by going to sleep and awakening at similar times each day, and by getting too tired to stay awake past one’s usual bedtime. Physical exercise can help this.

An overstimulated mind can have more trouble getting right to sleep at night. The overstimulation can happen from television, time on the Internet, and lights that are too bright. Instead, one can spend the last hour before sleeping with more quiet activities, including reading, and spending quiet time with household members.

Of course, it is not enough to fall asleep, but to stay asleep. I know of many people who have trouble sleeping the night before trial, and sometimes many nights before trial. Some people start waking up at 3:00 a.m. or earlier thinking about work. Perhaps insomnia problems will subside the more one focuses on a good balance of work during worktime, sleep during sleep time, some personal time each day not devoted to work, and good diet and exercise.

Some or many of you hopefully have no trouble with a good balance of diet, rest and exercise. If that describes you, you probably have not read this far into this article. However, if you have read this far, I invite you to comment on this article. There is a reason that hundreds of millions of dollars are spent each year on diet books, dieting programs, and liposuction; personal exercise trainers; and sleep disorder centers.