Getting to yes with North Korea 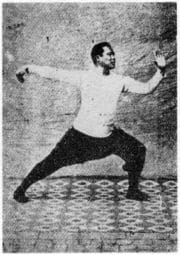 T’ai chi helps the negotiator to listen, and to push effectively without being pushy. (From the public domain, showing the single whip position of yang style t’ai chi.)

Sixteen years ago, a seasoned and able civil rights lawyer told me about the importance for a litigator to have strong negotiation skills, and not just strong courtroom skills. In that regard, he talked about the importance of knowing what the other side wants. Those words are second nature to me by now, but at that time, with no more than two court appearances under my belt (an asylum hearing and a deportation hearing in immigration court), those words rang like a new message.

Knowing what the other side wants is a true art, and requires being able to quiet one’s mind, so that the negotiator may hear the other side through the opponent’s words, through actions, between the lines, and through anticipating the other side’s next moves, as would a master chess player or t’ai chi master. I have written about negotiation skills and strategy here, here, and here.

Recent testimony to the importance of patient and skilled negotiating comes from this month’s breakthrough in China in the nuclear arms negotiations with North Korea. All is not yet solved, and distrust remains between North Korea and the United States, but they apparently have been investing the time to get to yes.

Sometimes, successful negotiating requires one or more mediators or negotiating parties. In this instance, China’s participation may have played a pivotal role. As the New York Times reports: ‘If they renege on this,’ said one senior Bush administration official, who would not speak on the record because the deal had yet to be signed, ‘they are sticking their fingers into the eyes of the Chinese.’

I am very interested to know the extent to which internal debates took place in the Bush Administration (and in the North Korean government, if any government officials there feel permitted to debate without the potential penalty of prison or worse) about the extent to use diplomacy rather than baring and even using fangs. I am also interested in knowing the extent to which the deal with North Korea was reached through skilled negotiation or more mediocre negotiation skills and strategy. Then again, maybe North Korea’s very possession of nuclear weapons made the United States more willing to spend time negotiating than was the situation with Saddam Hussein’s Iraq, which had no nuclear weapons when Gulf War II started.

A colleague once said that lawyers at one of the prosecutors’ offices that I frequently deal with have in the past (and possibly in the present) been trained that their plea discussions are offers — apparently sometimes of the take-it-or-leave-it kind — rather than plea "negotiations". However, even with that office, sometimes only after the dust has settled by the courtroom being cleared of most of the docket for my trial to start, on several occasions I have negotiated favorable settlements through negotiating on goals rather than positions.

For me, a critical ingredient to successful negotiations is the willingness to agree to disagree, rather than ranting and raving about the unreasonableness of the other side’s proposals and positions. With North Korea and the United States, that must not have been easy at all.

In any event, for litigation, a case is more likely to settle (sometimes with a result better than a guilty finding, in criminal cases) when the lawyer fully prepares the case to go to trial, and the opposite is true when the lawyer has only prepared the case to be negotiated. Sometimes such full trial preparation wears the opponent down, to help open the doors to a negotiated result. For litigation, the purpose of negotiation should not be any fear of going to trial, but instead an effort by both sides to hedge their bets. Time, patience, intuition, empathy, deep listening, flexibility, selflessness (to a point), and substantial firepower are among the critical ingredients of successful negotiations in litigation. Jon Katz.