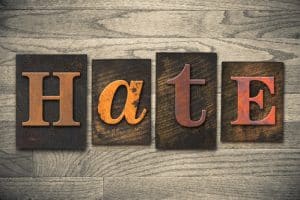 Hate speech and hate crimes remain too prevalent in society. The following are but a few examples: Dylann Roof‘s racism led him to commit mass murder at a Charleston church in 2015. Racist James Fields, Jr., drove his car into a crowd of anti-racist demonstrators in Charlottesville, Virginia, killing Heather Heyer and injuring thirty five other people.  Last year, around two miles from my Fairfax, Virginia, office, Dylan Mahone, caught on surveillance video, spray painted multiple swastikas and other hateful messages on the Jewish Community Center and nearby United Church of Christ, both located within a mile of his home, and only around ten miles from the former Arlington, Virginia, headquarters of the ultimately-assassinated (by another neo-nazi) nazi leader George Lincoln Rockwell.

NBC reports that: “Among the hateful messages at the JCCNV on Little River Turnpike, ‘Hitler was right’ was spray painted across an entrance. A swastika and an “SS” symbol were spray painted onto exterior walls. The nearby Little River United Church of Christ also was vandalized, with swastikas, anti-LGBTQ messages and anti-Muslim signs. ‘Defend America; No Muslims,’ was written across the front door.”

According to NBC, Mahone told police “Heil Hitler. No regrets.”

This month the apparently unrepentant Dylan Mahone was sentenced to a total of twenty-one months active incarceration on his guilty pleas to “three counts of felony destruction of property, one count of using a swastika with the intent to intimidate, and one count of wearing a mask in public to conceal one’s identity.”

I have no quarrel with Mahone’s property destruction conviction (separate and apart from any discussion about his sentence). I do oppose Virginia’s statutes criminalizing swastika displays and wearing masks in public.

Fairfax criminal lawyer on the criminalizing of displays of swastikas, which before Hitler was a positive symbol

Virginia’s law criminalizing swastika displays as a Class 6 felony has been in effect since the 1975 (enacted at the same time as the Commonwealth’s anti-cross burning statute), and in pertinent part provides: “It shall be unlawful for any person … with the intent of intimidating another person … to place or cause to be placed a swastika on any church, synagogue or other building or place used for religious worship, or on any school, educational facility or community center owned or operated by a church or religious body…. [A]ny such placing of a swastika shall be prima facie evidence of an intent to intimidate another person or group of persons.” Va. Code § 18.2-423.1.

Virginia’s anti-swastika law amounts to a First Amendment-violative content-based criminal statute. As with the Commonwealth’s anti-cross burning statute, I anticipate that the courts will strike down the foregoing language making the swastika’s very use prima facie evidence of intimidating intent, but will otherwise uphold the statute so long as intimidating intent is proven. See Elliott v. Virginia, 267 Va. 464, 593 S.E.2d 263 (2004).

This is part one of a two-part article. The second part is here.

Fairfax criminal lawyer Jonathan L. Katz defends both those charged with crimes and those whose free expression and First Amendment rights are threatened by the government. To discuss your case with Jon Katz, please call his staff at 703-383-1100 to schedule a confidential consultation.