I’m afraid that affray is still a crime in Maryland 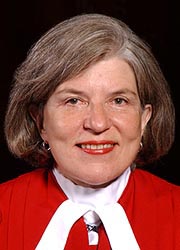 Maryland Court of Appeals Chief Judge Robert Bell and Judge Lynne Battaglia, in their red robes that come with the territory.

Like many other court systems, Maryland’s follows the beat of its own drummer, perhaps starting with the bright red robes of the state’s high court judges, which possibly are an improvement over the lifeless black robes worn by the rest of the state’s judges. However, judges’ robes of any color seem ironically regal in a society that supposedly overthrew royalty in the Revolution

In Maryland’s criminal law system, several common law crimes have been inherited from England, which also is ironic when considering all the blood spilled during the American Revolution. Today, Maryland’s intermediate appellate court had this to say about such a strange state of affairs:

The common law in Maryland is derived from our ancestral connections with English law. The English common law became part of the Maryland common law when the Declaration of Rights was adopted on November 3, 1776. Article 3 of the Declaration of Rights originally provided, in pertinent part, “[t]hat the Inhabitants of Maryland are entitled to the Common Law of England . . . subject, nevertheless, to the revision of, and amendment or repeal by, the Legislature of this State.” Md. Decl. of Rights, Art. 3. This provision is currently embodied in Article 5. Additionally, much of  Maryland’s adoption of the English common law extends farther back than 1776, as Judge Eldridge noted in Baltimore Sun Co. v. Mayor and City Council of Baltimore, 359 Md. 653, 661-62 (2000). Judge Eldridge, writing for the Court of Appeals, discussed the adoption of the common law and noted that the common law of England was adopted as early as 1639, when the Maryland General Assembly approved the “Act for the Liberties of the People,” and that the “rights embodied in the Act of 1639, specifically the right to the benefits of the common law of England, are presently embodied in Article 5 of the Maryland Declaration of Rights, originally enacted in August 1776.”

Hickman confirms that affray remains a viable common law offense in Maryland. By the same token, however, Hickman seems to acknowledge that assault ordinarily is an element of affray (unless both parties consent to fight). Therefore, if one is convicted of an affray and an assault that is part of the affray, it would appear necessary to merge any assault conviction into any affray conviction, and to only sentence for one of the counts. Affray being a common law crime without any statutory limitations, the maximum possible penalty for affray is any sentence that is not cruel nor unusual, whereas the Maryland Code limits an assault sentence (simple assault also is a common law crime in Maryland to ten years. On affray, Hickman says:

A second significant difference between the crimes, which demonstrates that affray is neither a form of common law assault or battery, is the victim, or party against whom the crime is committed. “An affray is an aggravated disturbance of the public peace and is an offense exclusively against the public.” 2A C.J.S. Affray, § 5 (citing Chiles v. State, 15 Ark. 204 (1854) and State v. Weekly, 29 Ind. 206 (1867)). An affray is, therefore, characterized as a public disturbance, a crime against the public and its aim is to protect the peace. People v. Perry, 193 N.E. 175, 177 (N.Y. 1934). By contrast, an assault can be a crime against an individual and, in this respect, differs significantly from the non-personal offense of an affray. C.f. Taylor v. State, 214 Md. 156, 159 (1956) (stating that criminal assault can be a breach of the public peace or a crime against a person). As stated by the renowned authority on the English common law, Sir Matthew Hale,8 “An assault is but a wrong to the party, but an affray is a wrong to the Commonwealth.” Sir Matthew Hale, The History of the Pleas of the Crown, Vol. II at 92 (8th ed. 1800).

Consequently, we can list affray with such other archaic but viable crimes in Maryland as rogue and vagabond, and unauthorized use of livestock.

ADDENDUM I: For there to be an affray, Hickman requires that at least two people be fighting in a public place. Hickman calls an affray an aggravated disturbance of the public peace. Hickman declines to decide whether Maryland affray law requires — as at least one other jurisdiction does — that the affray be to the terror of the public, because that issue was not raised by the appellant.

“But the right of a person not an officer to make an arrest is not confined to cases of felony, for he may take into custody, without a warrant, one who in his presence is guilty of an affray or a breach of the peace.”