Judy Clarke is my longtime hero 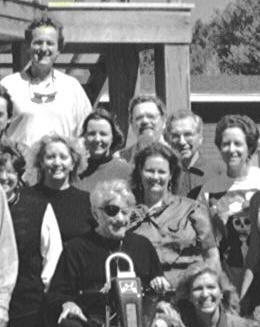 Judy Clarke stands behind the late Bob Rose (who is wearing an eyepatch). The rest of the photo is here. (1995, Thunderhead Ranch, Dubois, Wyoming.)

Nearly a decade ago, I put together a webpage of ten great lawyers and friends for justice. Judy Clarke — who currently defends Jared Loughner — has always remained among them. I only heap praise when I truly mean it.

When I joined the National Association of Criminal Defense Lawyers in 1991 at the start of my criminal defense career, Judy was already on or very near the ladder to becoming its president. NACDL quarterly conferences included rooms of many huge egos, but Judy had no ego to drag around and pamper. While I had nothing that I knew of at the time to be of benefit to her, Judy, like numerous other NACDL giants, welcomed me into the fold and gave me her time to talk about the often tough path of fighting for criminal defendants.

Judy inspired me on my path as a public defender lawyer and criminal defense lawyer. For years, she worked as a full-time public defender lawyer, including heading federal defender offices, and now continues doing such critical indigent defense work as the defense of Jared Loughner who no matter how loathed does not change my total opposition to capital punishment.

When I asked Judy about how to break through the heavy competition for public defender lawyers to gain admission to the phenomenal two-week National Criminal Defense College’s Trial Practice Institute, on which she was a board member, she encouraged me to re-apply rather than to give up. So I reapplied, and got accepted a year later in 1994.

Curiously, a search for "Judy Clarke" on Google images turns up my webpage as the first result. She is pictured here behind the late Bob Rose (wearing an eyepatch) in the 1995 Trial Lawyers College group photo. In the remainder of the group shot, you see me four people to the left of Bob Rose in the middle row. While Judy was there, we took a run together in those mountains with reduced oxygen. She remained as much the real McCoy as CNN’s Ann O’Neil recently depicted.

Thank you Judy for speaking out by example for the Constitution, for indigent criminal defense, and for the abolition of the death penalty.

Posted in Criminal Defense
← Fourth Circuit: Virginia 251 marijuana dispositions are not always convictions for immigration purposesLimits on police power to arrest for misdemeanors not committed in their presence →