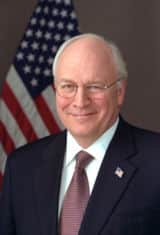 Do not hold your breath for Cheney to come clean about his involvement with Plame-Gate. (From the public domain).

As I already have said, as much as I want Bush out of office, I would have been more than happy to see Mr. Libby acquitted. His indictment accuses him of lying to law enforcement and the grand jury investigating how and when Valerie Plame’s CIA employment status got leaked to the press. So long as the criminal justice system remains as unjust as it has long been, it will be difficult for me to want to see convictions for such alleged crimes.

Do not hold your breath for Cheney to come clean about his involvement with Plame-Gate. If George Bush II decides to pardon Mr. Libby, I can think of many equally deserving — but less influential — candidates for Mr. Bush to pardon. So, Mr. Bush, please be ready to leave the light on for me.