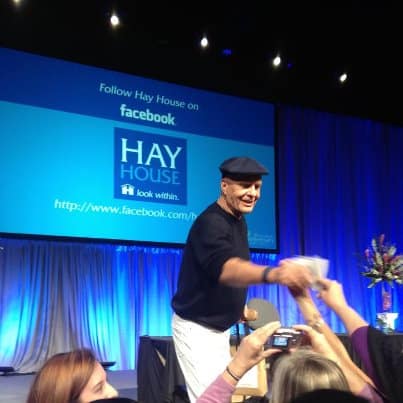 Wayne Dyer is one of my vital role models. He emphasizes that we all arise from abundance, so an abundant life is ours for the taking might at first sound superficial, but actually is vital for not getting sidetracked by all the naysayers along the path, including my relative who questioned my interest in trial law (before I entered law school), asserting that one needs to be a good actor to be a good trial lawyer. My supreme trial law mentor Steve Rench (the inspiration for my blog’s name) proves that one need not be a born actor to be a great trial lawyer.

Thanks deeply to Wayne for coming from his home in Maui — whether directly or not — to spend two and one-half hours sharing his wisdom, inspiration and essence with a crowd of three thousand this past weekend at the National Harbor just south of Washington, D.C. Some of what I learned and re-learned from this gathering included:

– At twenty-one in the military in Guam, Wayne developed a huge growth in his buttocks, which arose from the huge climate change between the Midwestern United States and the tropics. He was referred to have it remove by having a huge part of his buttocks sliced off. He resolved not to get the surgery, and woke up the day of his surgery (three days after surgery was prescribed) to find the growth gone.

Now, I do not believe in metaphysically healing, but do believe that replacing stress with abundant and positive thoughts improves our health, including my own experience eliminating (unless it was a mere coincidence) my years-long facial warts and flattening the non-facial ones through a night of focused imaging that they were gone, at the age of eleven or so. Wayne’s twenty-two-year-old daughter got onstage, recounting that she ridded herself of her warts at the age of five — with her parents’ assurance that she could do it — by silently telling them she loved them but that it was time for them to part.

– Wayne strongly believes that love and fear cannot coexist, so he chooses love. At first blush this may sound oversimplistic. However, when we look at love in terms of loving ourselves and others — including metta, lovingkindness — we expand into focusing on harmony and abundance rather than on fear and failure.

– Applying his philosophy of love, Wayne focuses heavily on others’ wellbeing, rather than just his own. At the nearby pharmacy the evening before his talk, he bumped into a woman who plays his tapes daily, and who was recently released after four months for a serious disease. He underscored our ability to heal our ailments, and talked a bit about how he healed his leukemia, with the help of a healer in Brazil. Another fan saw him at the pharmacy who attended his talk, as did an employee there. He spent time talking with them all.

Wayne believes in the reality and power of our connectedness to each other. Sometimes even people dying his phone number accidentally recognize his voice. He sometimes goes out of his way to send them one of his books or tapes, which are catalysts for benefits for so many.

– Wayne graciously autographed a few books, including some of his children’s books, for our six-year-old son, who gave him a peace crane that I had recently folded.

This all ties into the practice of criminal defense for continuing to be inspired to do justice and to utilize all the tools and law for doing so, rather than to feel debilitated by the many obstacles to achieving justice for my clients.

Posted in Persuasion
← Is the driver feeling road rage going to be your potential juror?To piss off prosecutors and judges or not – That is the question →