Defending cases, felonies and misdemeanors. Fighting tirelessly for the best possible results for his clients. 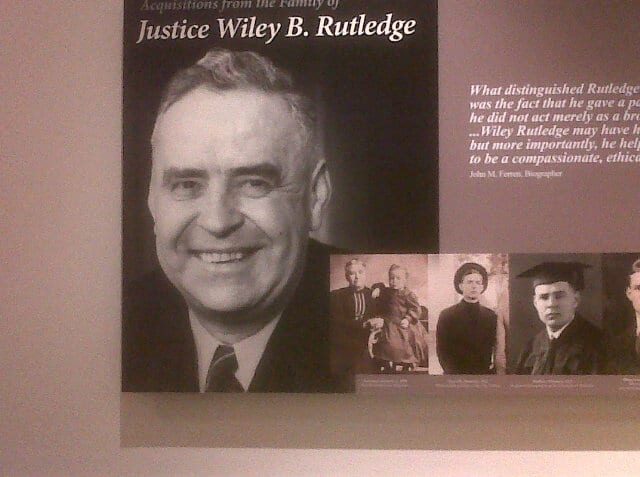 In one of the hallways of the Supreme Court is a large information display about Justice Wiley Rutledge, whom the New York Times called at the time of his death “one of the kindest and most courteous of men” as was Justice Brennan.

My two-day marijuana trial was dismissed yesterday when the prosecutor was not ready for trial. As fortune would have it, this morning was then available to observe oral argument in two Supreme Court criminal cases today, which are Perry v. New Hampshire, whose petitioner seeks more safeguards to keep unduly suggestive witness identifications of suspects out of trial, and Gonzalez v. Thaler, covering certificates of appealability of habeas corpus cases from state court to federal court, and timeliness for filing for federal habeas corpus relief.

Here are some of my observations from my visit today to the Supreme Court:

Justice Rutledge called In Re Yamashita the Supreme Court’s worst opinion other than Dred Scott. He and another justice dissented in Yamashita, which allowed a postwar execution of a Japanese military commander on the orders of a non-lawyer military commission, apparently for atrocities carried out by his subordinates without Yamashita necessarily having known in advance of the atrocities.