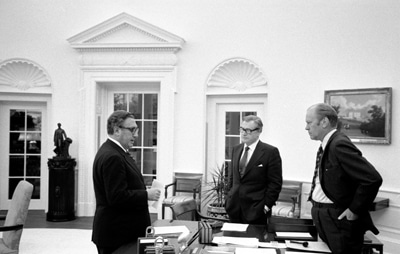 Many of the comments on Gerald Ford, after his death, in the widest-circulation press were so myopic as to be of little use to historians committed to writing the truth, the whole truth, and nothing but the truth.

All presidents are human. Gushing over them upon their deaths may serve the desire of some to elevate presidents higher than that, or to try to show them respect, but their deaths certainly should not lead to whitewashing their pasts.

Here is some food for thought in assessing Ford’s presidential performance. Some of these points have been made elsewhere on the Internet, but often with a vengeance against Ford that I do not feel:

– Ford seemed to be a kindhearted man who had little obsession with power. I was eleven when Nixon resigned and Ford took over, and I followed his presidency as it happened.

– He was a moderate Republican, winced at the profound rightward shift of the balance of power in the GOP, and told Bob Woodward of his dissent from the Bush Administration’s decision to start Gulf War II.

– It is hard for me — particularly as a criminal defense lawyer — to be upset that Ford pardoned Richard Nixon so long as it did not involve any secret deals. (If any secret deals took place, they likely were not to any benefit of Ford, who was practically guaranteed the presidency sooner or later, because Nixon was not going to stick around for an impeachment trial.) However, in granting Nixon the pardon, Ford pointed out how much difficulty Nixon would have in obtaining a fair jury trial. Hopefully people realize that on a daily basis countless people face jurors and judges who will not give them a fair trial, whether due to racial bias, hatred of the defendant’s views or lifestyle even if neither have any relationship with the alleged crime, prejudicial pretrial publicity, and the list goes on. To this day, presidential pardons repeatedly forget the powerless and voiceless — but no less deserving of pardons — among convicted people.

– Although he dissented from Gulf War II, Ford put two of the war’s architects in two of the most powerful positions in his administration: Cheney as chief of staff and Rumsfeld as defense secretary.

– Although he came into office claiming that the national nightmare was over, he brought in such Nixon holdovers as Kissinger, now as Secretary of State. Kissinger repeatedly and grossly placed realpolitik above respect for and protection of human rights.

– Ford kept Al "I’m-In-Charge" Haig in his Nixon White House position as chief of staff, and Haig later re-emerged as Reagan’s Secretary of State. What did Ford get in return?  Says MSNBC’s Andrea Mitchell: "Bluntly put, [Ford] thought Haig – a holdover from the Nixon White House – had been disloyal, had in fact gone behind his back to tip off Nixon that Ford was going to grant the pardon in any case – so that Nixon didn’t have to admit anything to get it."

– In 1975, Ford and Kissinger together gave Indonesia the green light to invade (see here also) and take over East Timor, which led to some of the Suharto government’s most brutal and widespread human rights violations.

– Argentina’s dirty war started during Ford’s Administration, and Pinochet was in his second year in power after his U.S.-supported overthrow of Salvador Allende. Whether or not Ford intended to support both regimes despite their severe human rights abuses, he apparently did little or nothing to stop the abuses there.

– Fortunately, Jimmy Carter made human rights a hallmark of his campaign, and moved human rights higher up on the agenda than in previous White Houses. This profoundly influenced me on my own road to decades of work for human and civil rights, after witnessing a shift from a ruthless and angry-seeming president (Nixon) to Carter, who sincerely cared about human rights and decency. That is not to say, though, that Carter always practiced as he preached, including Carter’s targeting of Iranian students for deportation after the shah’s overthrow.

– Robert Parry — who has written for Newsweek and the Associated Press — believes that Ford, as president, first tried to rein in some presidential power, but later did the opposite, to the point that he paved the way to George Bush, Jr.’s current and heavy consolidation of tremendous power, thanks in part to the role of George Bush, Sr., as CIA director.