On the Road taken 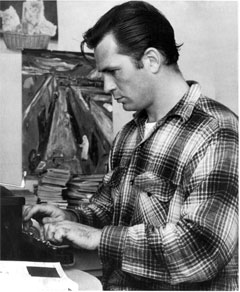 For the longest time, I have been fascinated with the Sixties (as opposed to just the decade of the 1960’s) — in part because I was too young sufficiently to understand the period as it was happening — so it was only natural that I signed up for my freshman college English seminar "America in the Sixties," taught by Diane Carmody Wynne.

Many times, Professor Wynne would mention  Allen Ginsburg and Jack Kerouac, whose On the Road approach to life and writings heavily influenced the hippie movement. Not until three years later did I finally read, and devour, On the Road. Kerouac refused to be hemmed in by all the McCarthyism and superficial homogeneity of the Fifties, and instead embarked on a life of adventures and writings that put his own vision on what life was and could be. Kerouac hung out with such beat generation leaders as Allen Ginsburg, who once said that while watching Ike deliver a presidential speech, he remarked to his companions that their vocabulary and manner of speaking was strikingly different from Ike’s, which was devoid of spice, rhythm, or any hint of the counterculture and social upheaval that would fully reveal themselves in the next decade, including during the watch of Ike’s then-vice president.

I finished On the Road on a train returning me to Montreal from Quebec City. I accidentally left it in the seat pocket in front of me, and hope it got into the right hands of someone else temporarily or permanently on the road. Kerouac’s family is French-Canadian; how curious that I finished and left the book in the very province where I suppose many of his ancestors lived.

Kerouac and his writings have tremendously influenced me to continue finding adventure in every day; to breathe life, spice and passion into my writing; and to continue to listen to the path my life leads me on, rather than concerning myself too much with what others think about that (other than to consider the impact on my clients of judges’ and juries’ views of my actions, and to consider my actions’ impact on my family).

I understand it took Kerouac a few years to get his On the Road masterpiece published, which finally happened fifty years ago. Recently, Slate interviewed some people who knew Jack. The article is a good read.

Curiously, I attended college only about thirty miles from where Kerouac grew up, in Lowell, Massachusetts. On a recent return visit to the area, I exited into Lowell for the first time. The town has some interesting places to visit, but, aside from Kerouac’s history there, does not seem to be much out of the ordinary from plenty of other towns in the region. It is a tribute to Kerouac that he transcended the ordinary to live and write the extraordinary. Jon Katz.