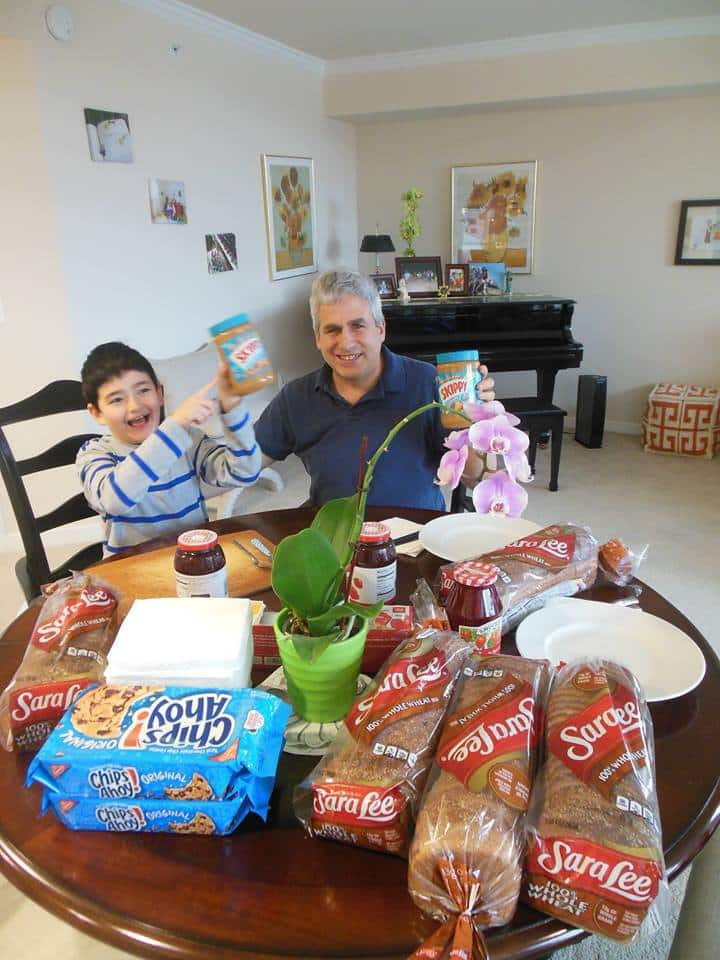 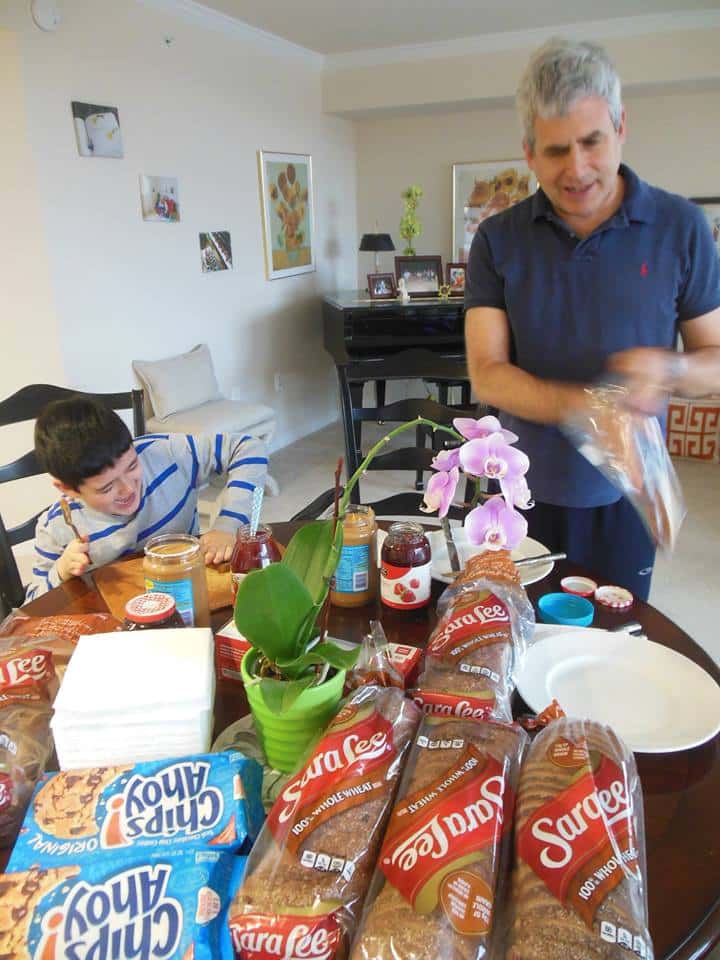 About to make fifty sandwiches. (Photo property of Younghee Katz). Making the sandwiches.

Certainly overdue, now that my son is eight years old, I invited him to join me and my wife to spend a day of service for this year’s Martin Luther King Day. My son jumped at the idea, and we decided to make and share fifty peanut butter and jelly sandwiches and cookies with people in downtown Washington, D.C., and Dupont Circle.

Martin Luther King, Jr.’s, great deeds merit treating his birthday not as mere day off from work, and not a day of work, but a day that includes service. A great delight with all this was the bonding and banter between me and my son as we made and bagged all the sandwiches, and the great time my son, wife and I had as we shared the sandwiches with homeless people and anyone else wishing one.

Our menu choice was guided by practicality and, as a twenty-six-year vegetarian, my not handling meat, fish or fowl. As I located, bought and carried five loaves of bread, two supersized jars of peanut butter, three large jars of strawberry jelly, two bags of Chips Ahoy cookies, and a box of ziploc bags — let alone taking the significant time to make the sandwiches — I realized all the more how much of an undertaking is involved for community organizations to provide homeless people three times daily with meals more elaborate than simply peanut butter and jelly sandwiches.

As a law student in Washington, D.C.’s Foggy Bottom neighborhood, I repeatedly met homeless people asking me for money for food, which was a continuation of my experience living and working in Manhattan for a year between graduating from college and starting law school. My responses varied from giving them money, offering to buy them food myself, or declining for various reasons (running from being in a hurry to taking the misguidedly judgmental view that at least some of these folks would just spend the money on alcohol or cigarettes). While still a law student, before the Internet age, I wrote to local homeless advocate Mitch Snyder, asking him where I might tell homeless people they could regularly get food, since I did not see the same homeless people on a daily basis. Mitch — who once responded to a disoriented woman who punched him as he spoke to a reporter, by running over to and hugging her with all his love — responded, obviously, that homeless people know where to get food, and encouraged me to reach into my pocket when asked, to show I care, and to show I see them as humans worthy of such action. He signed off with “Love, Mitch.” On this annual day of service, it was more meaningful to put our love and caring into making sandwiches than just to walk around giving unsolicited money or restaurant gift certificates.

We are all connected, so our interactions with people on this day of service was about connecting, person to person and heart to heart. Because we all are connected, nobody is above or below us. Our one action this day was not going to end homelessness or hunger; that will happen through the ongoing and improved efforts of many, including helping give people the resources to get homes and lift themselves out of poverty.

The people we met ran from those who expressed their deep appreciation to us, to those who just said thank you and went about their business, to those who just agreed to take what we had offered. Nobody declined our offer other than a decades-long peace activist who is daily in Lafayette Park facing the White House.

We met a man who told us he had recently become homeless, and showed us the container units he and others in the park had set up to share clothes and other items, watching after each other. We met a man in Lafayette Park wearing an Obama sweatshirt truly enjoying being in the now on that nice day. We met a man in Dupont Circle (we met many more men than women) who pointed to his throat indicating he could not talk, and offered a handshake.

It turned out that we were meeting few enough people that after offering them two sandwiches each, we still had around ten left, and a man standing outside the CVS at Dupont Circle offered to share them with those who would be interested, and we heard him call over to one of his friends as we walked to our car. I wish that not meeting more homeless people in those locations was an indication that people’s financial lot is significantly improving; hope springs eternal.

And then we spent some time enjoying ourselves more in D.C., and eating at a great restaurant near the White House that is so vegan friendly that it serves a great Sunday all-vegan brunch.

Every day, of course, should be a day of service in one way or another, starting at the very least with showing kindness and compassion to all, and ideally spending at least part of each week making this world a better place.