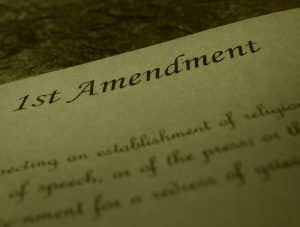 President Trump prides himself in talking outrageously. As a Fairfax criminal lawyer, I know that when Donald Trump speaks in disregard of the rule of law and free speech and free press, that can lead police and mobs to disregard those rights as well. Plenty of my criminal defense and DUI clients v0ted for Trump and will vote for him again, whether out of choosing him as the lesser of two evils, or truly embracing his agenda. They are among those who can best convey some sense to Trump that he went overboard in mocking MSNBC reporter Ali Veshi for getting hit by a rubber bullet while doing his job.

Trump should not be about whipping up mob frenzy, but that is his trademark

President Trump is about whipping up mob frenzy at his rallies and beyond, disregarding First Amendment free expression and press protection when at a September 18, 2020, rally in Minnesota he mocked MSNBC reporter Ali Velshi : “He got hit on the knee with a canister of tear gas, and he went down. He was down. ‘My knee, my knee.’ Nobody cared. These guys didn’t care. They moved them aside, and they just walked right to … It was the most beautiful thing.” Minute 12:20 here  (and minute 21;29 at this Rev.com transcription).
Reporter Velshi esponds to President Trump: “So, @realDonaldTrump, you call my getting hit by authorities in Minneapolis on 5/30/20 (by a rubber bullet, btw, not a tear gas cannister) a “beautiful thing” called “law and order”. What law did I break while covering an entirely peaceful (yes, entirely peaceful) march?

Encourage the president when he is on the right path, and discourage him away from the wrong path

This is not a partisan blog. Plenty of violations of criminal defendants’ rights come from across the political spectrum. I am certainly no fan of Joe Biden nor Kamala Harris. Although I will vote for Biden as the lesser of the evils who, for instance, will make less disastrous Supreme Court and federal court judicial appointments, I also recognize that Trump may be less trigger happy with the military than would be a president Joe Biden, and that Biden and Harris were far from enlightened with criminal defendants’ interests and rights when respectively a senator and chief prosecutor, whereas Trump signed the First Step Act into law. At the same time, Trump’s mockery of a reporter hit by a rubber bullet while peacefully doing his job is beyond the pale for anyone’s preferred occupant of the Oval Office, and is essential that we all condemn it.