Protect human rights in the Philippines 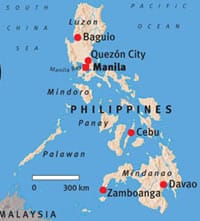 Over ten years ago, I accepted an invitation to join the Philippine American Bar Association of the Washington, DC area (PABA), which seeks members both with Filipino and non-Filipino roots, of which I have none. I liked several of the members, and still do, and found at least two who believed very much in human rights activism (at least one of whom was an anti-Marcos activist while still in the Philippines), and a few others who understood my human rights message.

I checked the Philippines’ human rights situation from time to time — usually in Amnesty International reports, and usually not finding much to smile about —  ultimately reading accounts in 2005 about the Arroyo government’s suppression of demonstrators with water cannons. Then, in early 2006, the Arroyo government declared a state of emergency, during which the police arrested three Arroyo critics, and police raided a small newspaper critical of the Arroyo government, with police seizure of editorial materials and threats to take over the newspaper. Clearly, the People Power upsurge that led to the voluntary departure of the tyrannical Ferdinand Marcos did not bring with it a guarantee of a human rights paradise (nor is the United States a human rights paradise for that matter, either (although human rights battles often can be won in the United States), aside from the United States’ repeated support over time for Marcos and countless other tyrants).

During the 2005 water cannon incidents and the early 2006 state of emergency declaration, I tried to convince PABA leaders to make at least a general stand urging the Arroyo government to protect human rights in the Philippines. The PABA leaders heard my voice, but took no stand. Consequently, particularly as a past four-year PABA officer through 2001, I resigned my PABA membership last year not long after the state of emergency had been declared, and I converted the unofficial PABA website that I created in 2000, into a demand for human rights in the Philippines.

Meanwhile, I have found another reason to remain a member of the National Lawyers Guild — despite my vehement misgivings with many of the Guild’s actions and policies — which is the Guild’s very active work insisting on the protection of human rights in the Philippines, gathering information on the human rights situation there, and running a listserv on the human rights situation in the Philippines. Recently off the presses is the March 8, 2007, update to Seeking Answers: Probing Political Persecution, Repression & Human Rights Violations in the Philippines. The report is by the Women’s Human Rights Delegation, on behalf of the Center for Constitutional Rights, the International Association of Democratic Lawyers, the International Justice Network, and the National Lawyers Guild.

Concerning PABA, I remain friendly with many of its members. However, friendship cannot stand in the way of standing up for human rights. Jon Katz.