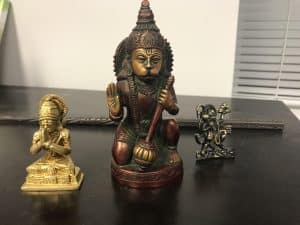 Ram Dass, born Richard Alpert and also known as RD, was among my important teachers. He taught the importance of service. He was love itself.

Ram Dass came to my attention late — five years after graduating college –when considering my strong interest in the 1960’s counterculture and hippie movements. A local real estate agent at the monthly Vegetarian Society lunch near my first law firm was talking about RD, and for the next thirteen years he was little more than a curiosity to me, a man who with Timothy Leary had turned on hundreds if not thousands of people to LSD when it was still legal, with the pair getting tossed out of their Harvard teaching positions only a month before I was born in 1963, after Andrew Weil printed an article about those psychedelic experiments in the Harvard Crimson.

In 2003, I learned that Ram Dass would be speaking at Washington, D.C.’s Lisner Auditorium, and I snagged a ticket. This was around six years after he had suffered a severe stroke, and in the interim went from deep depression over the stroke to conceiving his stroke as the fierce grace of RD’s guru Neem Karoli Baba, to remind him that we are not our bodies and about non-duality. RD spoke much more haltingly at the time, post-stroke, than in later years, as he talked about such matters as his love for his guru Neem Karoli Baba, and answered such questions as what RD thought of George Bush II. Keeping the high road, RD said nothing worse about him than that Bush must be undergoing a challenging reincarnation.

After his talk, Ram Dass received a long line of visitors wishing to meet him. I figured he would have been exhausted by then, but he took a firm grasp of my hand with his stronger hand, and offered me some words of wisdom That one-on-one meeting by itself captivated me enough about RD that I proceeded to read his essential books Be Here Now and Still Here, and to finally understand the importance of non-duality. RD s was also all about service and love. The service part is vital to me in my serving my clients, for starters. The love part for me works better with the approach of powerfully persuasive metta / compassion including in my deadlings with prosecutors and judges.

Ram Dass taught of the positivity of the dying process. He underlined the importance of relating with others on the soul rather than role level.

Another of Neem Karoli Baba’s devotees, Lama Surya Das, on Twitter this evening announced: “Our dear beloved Ram Dass passed from this transient life a few hours ago – peacefully, in his 80’s- at his home in Maui surrounded by an abundance of love. He had been sick & bedridden for the last few days.” While I am not superstitious, I nonetheless find it noteworthy that RD left his body at the age of 88, which is double infinity when rotated ninety degrees.

I was deeply blessed to have met and learned from Ram Dass. He showed the path without lecturing and without saying his teachings were right nor superior. He was pure love.