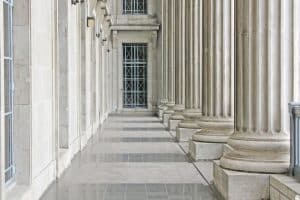 Rushing justice in criminal and civil court cases can be tempting to many trial judges, often facing crushing court dockets that keep getting piled with more and more cases.

As a Fairfax criminal lawyer, I believe that the solution to the challenge of overloaded court dockets is not rushing justice, but to push alternative dispute resolution in many non-civil liberty/rights civil case categories, and to shrink the criminal justice system by legalizing marijuana, prostitution and gambling; eliminating the death penalty; heavily decriminalizing drug laws; and eliminating mandatory minimum sentencing.

The death penalty continues to be lawful and exercised in Virginia and numerous other states, and drains scarce tax money in funding prosecutors, court-appointed lawyers, expert witnesses and expenses, while continuing to be a barbaric, irreversible, arbitrary and capricious system. Rushing capital convictions and executions is wrong.

Rushing deliberations this week, the five Republican-appointed Supreme Court justices granted Alabama’s petition to reverse the lower federal court’s temporary stay (pending further deliberation) of Christopher Lee Price’s execution in the light of expert evidence of the excruciating pain he will suffer if not permitted the Alabama-available alternative execution method of nitrogen hypoxia. Dunn v. Price, No. 18A1053, 587 U. S. ____ (2019).

“The Court nevertheless grants the State’s application to vacate the stay, thus preventing full discussion among the
Court’s Members. In doing so, it overrides the discretionary judgment of not one, but two lower courts. Why? The
Court suggests that the reason is delay. But that suggestion is untenable in light of the District Court’s express
finding that Price has been “proceeding as quickly as possible on this issue since before the execution date was
set.”

Rushing a life-or-death decision is not justice. Justice Breyer continues: “The Court also points out that Price did not elect nitrogen hypoxia within 30 days of the legislature authorizing this method of execution on June 1, 2018… [I]t appears no inmate received a copy of the election form (prepared by a public defender) until June 26, and the State makes no representation about when Price received it other than that it was ‘before the end of June’ … Thus, it is possible that Price was given no more than 72 hours to decide how he wanted to die, notwithstanding the 30–day period prescribed by state law. That is not a reason to override the lower courts’ discretionary determination that the equitable factors warrant a stay.”

We are talking about Price’s inevitable execution, not preventing it altogether

Gone is the golden age when now-late Justices Thurgood Marshall and William Brennan consistently confirmed that the death penalty is unconstitutional. No sitting justice takes that stance. The five justices who this week summarily reversed the stay of Christopher Price’s execution have essentially told death penalty states that they may feel emboldened to leave the light running in their death chambers.

Rushing towards he irreversible penalty of death, that does not bode well for what they will do in non-capital cases.

Fairfax criminal lawyer Jonathan L. Katz has for decades advocated the abolition of the death penalty, including with Amnesty International. He has defended people accused of crimes running from murder to rape, robbery, drug offenses, sex offenses and DUI. To discuss your case with Jon Katz, please schedule a confidential consultation with through his staff at 703-383-1100.