Sons of Bulls from Brazil already in the grocery aisle

Jan 17, 2008 Sons of Bulls from Brazil already in the grocery aisle 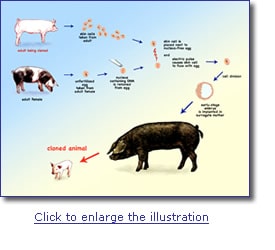 Responding to my cloned meat and milk blog entry yesterday, an acquaintance from Iowa, a farm state, wondered whether the prospect of cloned hamburgers was fanciful, considering the high expense of cloning. Before I was able to reply to him that the motivation might be high to produce clones to breed high quality meat and milk breeders, yesterday’s Washington Post beat me to it: “At least one Kansas cattle producer also disclosed yesterday that he has openly sold semen from prize-winning clones to many U.S. meat producers in the past few years, and that he is certain he is not alone… ‘This is a fairy tale that this technology is not being used and is not already in the food chain,’ said Donald Coover, a Galesburg cattleman and veterinarian who has a specialty cattle semen business. ‘Anyone who tells you otherwise either doesn’t know what they’re talking about, or they’re not being honest.'”

David Faber, who is president of one of the nation’s two main cloning companies, also admitted that clones’ descendants are going to lunch and dinner tables: “For now, Faber said, his company is targeting its cloning techniques at a small market of farmers raising elite breeding stock, what he calls ‘the rock stars of the barnyard,’ not those producing animals destined for the grocery store. ‘Cloning is for breeding, not eating,’ he said. ‘We are making sons and daughters, semen and embryos, not meat and milk.'”

As to humans, if one day it becomes possible to clone them, one market might be for selling designer sperm and ova for artificial insemination and in vitro fertilization (thus making it possible to have offspring with all their DNA from clones). As of now, many attempts at livestock cloning still end in fatal birth defects. The birth defects alone make cloning sound ghoulish, whether the cloning is of humans or non-human animals. Jon Katz.