Today and all days, we shall overcome 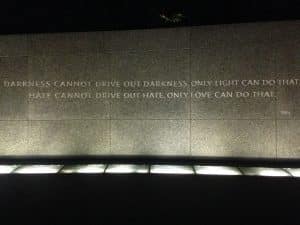 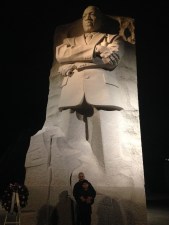 The darkness of the upcoming Trump presidency is offset by the light of the lessons of Martin Luther King, Jr.

Our law firm this and every year celebrates his birthday by being closed. Today, my son and I will join the annual peace walk on Martin Luther King Avenue, Southeast, in Washington, D.C. Then, we will perform service by going to one or more parks to remove trash. We will also have some fun together, because Dr. King’s vital message also was about liberation.

Martin Luther King, Jr., presented his immortal “I Have a Dream” speech when I was just four months old. When he was shot dead on April 4, 1968, I was only five years and three days old, and he was only thirty-nine. He would have been eighty-six years old on his January 15, 2016, birthday.

I have been very positively influenced by the nonviolent path in fighting for social justice from Gandhi and Martin Luther King, How did they take up and stay on the nonviolent path? For both, their deeply-held religious beliefs helped them on that path. For Gandhi — writes Radhika Rao –he was also influenced by the non-violence of his mother and of Tolstoy, and the civil disobedience message of Rousseau. Martin Luther King, Jr., was heavily influenced by Gandhi’s non-violent path, starting with Mordechai Johnson’s discussion of Gandhi. Ironically, hanging in King’s office was a picture of Gandhi; both were assassinated.

During the 1963 March on Washington, King pushed his prepared notes aside for his “I Have a Dream” speech, after singer Mahalia Jackson purportedly shouted to him “tell ‘em about the ‘dream,” and then transfixed the audience, and likely himself, with his dream of justice where “I have a dream” was nowhere found in the prepared text distributed in advance to the press.

“The ultimate weakness of violence is that it is a descending spiral, begetting the very thing it seeks to destroy. Instead of diminishing evil, it multiplies it. Through violence you may murder the liar, but you cannot murder the lie, nor establish the truth. Through violence you murder the hater, but you do not murder hate. In fact, violence merely increases hate…. Returning violence for violence multiplies violence, adding deeper darkness to a night already devoid of stars. Darkness cannot drive out darkness; only light can do that. Hate cannot drive out hate; only love can do that.”

In overcoming violence, we have a very long way to go. Let us make the first step and the next step today on the non-violent path.

Happy birthday, Martin Luther King, Jr., and thanks many time over.

Day of Service, Jr., Martin Luther King, We Shall Overcome