Thanksgiving view from a vegetarian

Nov 22, 2007 Thanksgiving view from a vegetarian 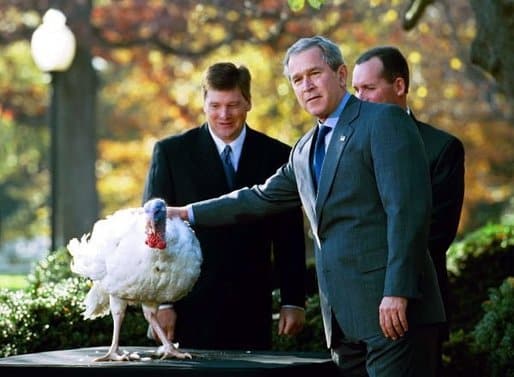 Regardless of their party affiliation, presidents each year "pardon" a turkey, only to leave 48 millions more for Thanksgiving slaughter.

I became a strict vegetarian in 1988 — and am now 99% vegan, after a three-year process eating up and down the food chain — after finding no logical basis to being an activist for human rights for many years, while still eating other mammals, birds and fish, and after learning that my health would suffer not at all by making the switch, and would in fact improve and has improved.

I usually have not gotten on a vegetarianism soapbox unless asked or taunted. This year I add Thanksgiving to my vegetarian soapbox motivations. Dozens of people wish me happy Thanksgiving. The happiness of the holiday is substantially diminished for me with the holiday’s heavily traditional focus on eating slaughtered turkeys. Every Thanksgiving meal I have joined has always had a turkey as a major centerpiece.

Many of the same justifications for subjugating animals for food and other human uses have been used in the past to justify subjugating minorities, women ,and other subjugated people. Am I merely wearing rose-colored glasses to expect that we would have a much less violent, more peaceful, harmonious, just and caring society if meat consumption plummeted? I do not think so.

Fortunately, vegetarian and animal rights activists offer some great alternatives to having a turkey corpse at the Thanksgiving dinner table. For years, the Vegetarian Society of the District of Columbia has hosted a sellout gourmet vegan Thanksgiving celebration. On November 17, Poplar Spring Animal Sanctuary in Poolesville, Maryland, hosted a vegan potluck Thanksgiving With the Turkeys. PETA’s website details the horrors that meat turkeys face from birth to slaughter, and provides some delicious vegan recipes together with suggestions for a Thanksgiving table that replaces a real turkey with soy-based Tofurky and Unturkey

Here is a suggestion to help reduce harm to animals produced and caught for the food industry (and to improve the environment, improve health, and reduce hunger in the process), rather than a suggestion for becoming completely vegetarian: Try going meatless and fishless for a day. If you do not now eat meat and fish every day, try adding an additional day that you eat vegetarian. If you end up feeling better spiritually and physically as a result, consider continuing to reduce or eliminate your meat and fish consumption. If even one million people followed this approach, millions of land and water-based animals could be spared annually. That would give me more to be thankful for at Thanksgiving. Jon Katz.