Was McCain a war hero? 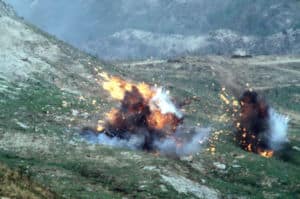 U.S. government photo. Napalm was one of the horrors of the Vietnam war. Here is the horrifying picture of Kim Phuc and other villagers after a napalm attack. Here are Kim Phuc’s resulting physical scars.

A trial lawyers listserv member who opposes McCain nevertheless sees him as a war hero. I replied:

I am curious why some or many think McCain was a war hero. I ask this for the following reasons:

– On the one hand, he cannot be accused of selfishly avoiding wounds and death in war, because McCain went to war. He apparently never gave into his captors, and, whatever his motivation, he rejected POW release before those imprisoned longer than he. According to the AP, he was “instrumental in pushing for normal relations between” the U.S. and Vietnam. https://www.msnbc.msn.com/id/25418965

– On the other hand, I ask these questions:

— Where did the United States military and its soldiers fall on the morality scale in the Vietnam War? Was it a just war? Does it make any difference that Congress never officially declared war? Where did McCain fall on this morality scale? Is it sufficient to say that it is not for a young soldier (McCain was already 29 when captured) to decide whether or not to go to war (never ever?)?

— Is it virtuous to avoid war if the purpose is altruistic? For instance, was it brave for World War II conscientious objectors to refuse to go to war, in order to avoid harming others?

— Is the pacifist movement irrelevant to the issue?

— The Vietnam War atrocities were deep and ugly, including by plenty of American soldiers: https://katzjustice.com/?s=winter+soldier

What if any role did McCain have in perpetuating, permitting, preventing, or vocally opposing atrocities by U.S. military members?

— When John McCain was captured in Hanoi, he had bailed out of his bomber aircraft. https://www.msnbc.msn.com/id/25418965 (who took this picture in the article showing his capture by civilians, I wonder?) What was his role on the aircraft? Pilot? Navigator? Medic? Bomber? Was it right to drop bombs on Hanoi? Did the bombing mission include civilians as targets? (This Nation Magazine article says McCain wrote that he was frustrated that commanders limited bombers to military targets, and that McCain would have escalated the war if he had the choice:  ).

Considering all this, was McCain a war hero? Jon Katz

Posted in Jon's news & views
← Beyond law blogsI will never forget that face? →