“We have been stripped of every defense,” says Watada’s court martial lawyer 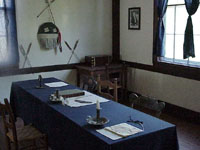 Today, Ehren Watada’s court martial begins, for his refusal to deploy to Iraq, and for conduct allegedly unbecoming an officer for his alleged statements against Gulf War II. Mr. Watada offered to go to Afghanistan, instead, and refused conscientious objector status.

Mr. Watada’s trial judge has refused Mr. Watada’s request to address the illegality of the Iraq war, and First Amendment protection of his statements for which he is being prosecuted. Regarding the judge’s rulings, Watada’s civilian lawyer said: "We have been stripped of every defense." "This is a disciplinary system, not a justice system. Otherwise, we would have been entitled to defend ourselves." Jon Katz.