“We’ll see about that” 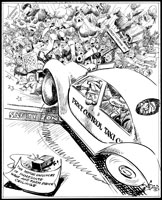 Sometimes depositions get ugly. (Image from Library of Congress’s website).

Before joining the Maryland Public Defender’s Office, where I worked from 1991 to 1996, I had an interview to switch to another corporate law firm. The interviewer represented depositions as a litigation career plateau. I was aiming much higher than such a plateau.

Until then, I had sat in on a deposition, but had not taken one yet. What made the deposition interesting — which involved a dispute by one or more banks — was that the deponent was a former bank officer who apparently had been convicted and served some prison time related to the litigation for which he was being deposed. Clearly, I was thirsting for something more socially and personally meaningful than such litigation, and got it once I joined the public defender’s office.

When I left the public defender’s office, I decided I would learn how to litigate civil cases — to add to my criminal defense work — which was particularly critical for the First Amendment defense work I do. By now, I have taken around one hundred depositions, which may only be held for civil cases in the jurisdictions where I practice. With no judge present at depositions, some litigators and deponents get more nasty and underhanded than would ever happen before a judge. I sometimes can eliminate such nonsense by such approaches as the following: 1. “You are setting yourself up for a sanctions motion. Please help me avoid wasting my time on that.” 2. “Behind you on the bookshelf is a copy of the rules governing depositions in our governing jurisdiction. Would you like to borrow it?” 3. “You are raising your voice at me apparently as an attempted impermissible end-run to intimidate my client. My client is here to answer questions, and nothing more. If you want to raise your voice at me, have at me out of my client’s presence, and I’ll have at you back, if I choose.”

While I generally get more exhilaration in trials than in the deposition room, some depositions can have their moments, including getting a chance to engage fascinating people with questions that are much more open-ended than would be prudent at trial. However, none of those depositions have been as fascinating as those here and here, which I assume are both staged. Turn on your speakers, unless you don’t want to hear expletives hurled about. I love how the second video’s character called Joe J___ (I assume it is not the real Joe J___, but I do not know what the real one sounds like) responds to a cantankerous deponent with “We’ll see about that.” That response could work well in some trial cross examination instances, too.

If you have any other interesting deposition or trial video clips, please post them here in the comments section. Jon Katz.

Posted in Persuasion
← It’s not how you dress, but how you persuadeIn defense of the speedy trial dismissal →