What Can Trial Lawyers Learn and Apply from Gandhi, MLK, and the Dalai Lama?

Not many people would get angry at the tiger making the attack. However, the main reason that people get angry at other people’s viciousness is feeling disappointed, at the very least, that the opponent does not appear to give a damn about fairness and justice.

We fight more effectively once we eliminate anger — which usually is rooted in fear and pain — although eliminating anger is much more easily said than done.

Many competitors make it a point to rattle their opponents with anger, discomfort and confusion. A trial lawyer once told of an opposing lawyer who, while making a point to the judge, walked right over to the lawyer’s table, paused, and walked away. A second later, the lawyer smelled that his opponent had intentionally let loose some toxic flatus. Not only did the lawyer not get angry, but he did something that flabbergasts me to this day — they became law partners.

Another trial lawyer related a bench conference where the opponent objected to the lawyer’s trial exhibit and started writing on the exhibit while objecting. In the non-legal context, a well-known basketball player got the notion that college rules allowed him to pull on the leg hair of his opponents, and he intentionally did this to rattle them. Another athlete told of never washing his wrestling clothes, so that the opponent would think twice about keeping a grip on him too long. The list of unfair lawyer and competitor tactics is limitless.

For a lawyer, the case is not about winning against the opponent, but is about convincing the decision maker. When a lawyer lets anger overtake the lawyer, it can be as futile as the scene in “Jaws” where the shark eats its own guts that have been slit open, because that is the shark’s nature.

Conversely, how is a lawyer to handle causing anger in an opponent? From time to time, some lawyers will caution against doing things that will “piss off” the opponent. However, that is just the start of the analysis. A lawyer’s goal should not be to anger the opponent. On the other hand, sometimes a lawyer cannot avoid such a result while simultaneously effectively representing the client. If an opponent exclaims surprise or anger that I am doing something so aggressively as to be causing the opponent a lot of hassle or anger, sometimes I will inform the opponent that my doing otherwise is disserving my client.

This issue follows me everywhere. I can only keep my anger on the sidelines by being mindful of the whole situation. This concept of being mindful of anger is underscored by Claude AnShin Thomas, who became a mendicant Buddhist monk years after killing hundreds of people in Vietnam. I met Mr. Thomas nearly two years ago during his speaking tour, and was taken by his dual approach of not denying or suppressing the anger that he still lives with — which for quite some time led him to soak himself in drugs, alcohol, and sex — but also doing his best to dissipate and reduce the pain and anger. When he is about to get angry, he accepts the feeling, but tries to dissipate it by focusing on his breath and on the sound of a bell, which I suppose helps get him back to concentrating on his breath and calm rather than on anger.

If Mr. Thomas, who experienced and caused so much pain, death and misery can find a way to dissipate his anger, his message is that just about everyone else has the capacity to do it.

When one faces a fierce opponent, one approach is to move beyond one’s reaction to the opponent, to what the opponent is experiencing. This is a psychodramatic approach. Ram Dass added humor to the mix when describing his view of George W. Bush three years ago. Rather than expressing anger or upset, Ram Dass joked that Bush must be going through a difficult reincarnation. The difficulty continues.

On my path towards eliminating anger, I try following the Dalai Lama’s approach of talking to everyone the same (as, apparently, did my hero Justice William J. Brennan, Jr., who “treated the Court’s janitors with as much respect as he did his fellow justices”), ideally to do it as kindly as I talk to my son or my most valued teachers. How often do we say and do things that hurt the ones we love the most? If I have trouble doing this all at once, I start doing my best to apply this approach of the Dalai Lama with my loved ones and friends; then with the people with whom I work; then with those who are not my opponents; then with strangers; then with judges; and then with opponents. By taking this gradual approach, it is easier to feel natural talking kindly to opponents when I am already talking kindly with everyone else. 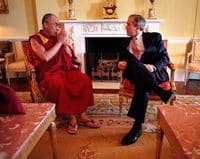 The Dalai Lama calmly sits with a man struggling with his reincarnation. In public domain.

Jurors appreciate the kind approach, which should not be mistaken with a weak or passive approach — even if we need to keep proverbial knives and daggers in our back pockets as a backup — because they then focus on the lawyer’s words, rather than being preoccupied with where the lawyer’s anger and self-control boundaries lie, and rather than getting irritated at the lawyer for expressing anger.

How, then, does a lawyer express passion for the client’s cause without expressing anger, since it can be hard for a juror or judge to get passionate for the client if the lawyer does not feel the passion? Ideally, if the lawyer feels the passion, the passion will shine, not only in the lawyer’s delivery, but also in the lawyer’s preparation and absorption in the client’s cause. I suppose this is how the Dalai Lama, Martin Luther King, Jr., and Gandhi live/lived every day: fully passionate about their causes, but refusing to let anger overtake them, despite the misery suffered by so many people around them. While I have learned much about these three human powerhouses, I have much more to learn about what happened in each of these men’s lives to make them able to reach such a place, and to learn how I and others can get there, as well.

Posted in Persuasion
← Marijuana not a Gateway Drug; and More from Amsterdam and VancouverHumanizing Criminal Defendants →