Why did Truman not dump J. Edgar Hoover? 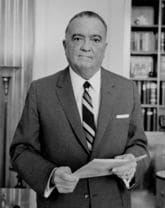 What made presidents so fearful of giving J. Edgar Hoover the axe? (Image from Library of Congress.)

As the New York Times tells it: Hoover’s proposal was for the FBI to "‘apprehend all individuals potentially dangerous’ to national security…The arrests would be carried out under ‘a master warrant attached to a list of names’ provided by the bureau. The names were part of an index that Hoover had been compiling for years. ‘The index now contains approximately twelve thousand individuals, of which approximately ninety-seven per cent are citizens of the United States,’ he wrote." The New York Times further reports: "In March 1946, Hoover sought the authority to detain Americans ‘who might be dangerous’ if the United States went to war. In August 1948, Attorney General Tom Clark gave the F.B.I. the power to make a master list of such people."

Fifty-two years after Tom Clark gave Hoover such approval, his son Ramsey — who became Lyndon Johnson’s last attorney general — said he felt Mr. Hoover meant well, and did not have vicious purposes. I wonder if this New York Times piece changes his opinion on that.

The New York Times piece ends with this chilling information: "In September 1950, Congress passed and the president signed a law authorizing the detention of “dangerous radicals” if the president declared a national emergency. Truman did declare such an emergency in December 1950, after China entered the Korean War. But no known evidence suggests he or any other president approved any part of Hoover’s proposal."

The parallels between the foregoing story and the Bush II regime’s actions and policies are frighteningly numerous. Jon Katz.

Posted in Constitutional Law
← Relaxing and sinking til January 1Execution in U.S. and China: Efficiency over humanity →