Why I am voting for Obama, and why I am inspired by Nader 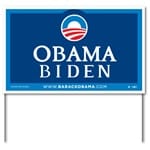 As I rise early on October 4, 2008, to get to the polls on the way to court, I will still be kicking myself for my own role, through inaction, in our having a two-party-dominated underdemocratic/barely democratic Tweedledum-Tweedledee political system. The tealeaves do not show that Obama will be any better a president than Bill Clinton was, and I was not overly fond of Bill, who maintained a government that was overly militaristic, overly-prosecutorial, and insufficiently protective of civil liberties. I voted for Bill Clinton, as I now vote for Barack Obama, as a less scary alternative to the other major party’s opponent.

Just as with George Bush, II, a president McCain will feel an obligation to pay further homage to the party’s morally conservative (an oxymoron) right wing, beyond his blunder of naming the woefully inexperienced, incapable Sarah Palin, who will be less of a friend to civil liberties than will John McCain.

The most lasting damage of a McCain presidency will be his lifetime appointments to the Supreme Court, and his dozens more annual lifetime judicial appointments to the lower appellate and federal trial courts. The next president will likely fill one to three vacancies for the Supreme Court. Justice John Paul Stevens — Ford-appointed but today comparatively one of the Court’s strongest friends of civil liberties — is eighty-eight, and will be nearly ninety-three when the next president leaves office; it is very doubtful that Stevens will stay on the bench as long as that. Justice Ruth Bader Ginsburg is seventy-five and will be seventy-nine when the next president leaves office. Justice David Souter on the one hand is only sixty-nine, but on the other hand is reportedly antsy to return to New Hampshire.

If you are not scared yet, consider this for post-Halloween terror: The three youngest justices are three of the four most rightwing on civil liberties issues, those being Justice Clarence Thomas, 60, Justice Samuel Alito, 58, and Chief Justice John Roberts, 53. That is no typo; Chief Justice Roberts is rightwing, 53, and will be at the Supreme Court’s helm a few more decades. The final member of the Supreme Court’s rightwing quartet is Justice Antonin Scalia, who is only 72, loves his job, and shows no signs of going anywhere for at least two more presidencies.

Even though Chief Justice Roberts may be a mensch off the bench, and has even been known personally to pass out Halloween candy to trick-or-treaters, that does not change the severe damage that he and the other Supreme Court rightwingers inflict on the Constitution each month.

A president McCain likely will nominate someone no less conservative than the Supreme Court’s current right-wingers. If you think we currently have too many abysmal Supreme Court opinions, just wait and see what will happen if a president McCain names Justice Stevens’s replacement after eight years of Bush, II, nominations to the federal courts.

Election Day is your opportunity to mobilize against further right-wing lifetime federal judicial nominations, not only to the Supreme Court, but to the lower federal appellate courts and trial courts, too, which apparently number in at least the dozens each year.

Sooner rather than later, of course, we need to break free from the two-party dominated system that overtakes the nation’s psyche to the point that one wonders whether schoolchildren realize that the nation’s political system is not limited to two parties. As Nader’s running mate Matt Gonzalez asks, “What do they [the Republicans and Democrats] have to do to lose your vote?” Had Ralph Nader not run for president in 2000, Al Gore would have beaten George Bush, II. Nader knew he would not win the presidency, but also had a powerful message that most Democratic and Republican candidates and officeholders are more fundamentally alike than they are different, maintaining most of the status quo of the government-military-industrial complex. The only way to break out of the woefully underdemocratic two-party system is to risk electoral victories by the worst major candidates on the road to a truly multi-party system. Jon Katz.