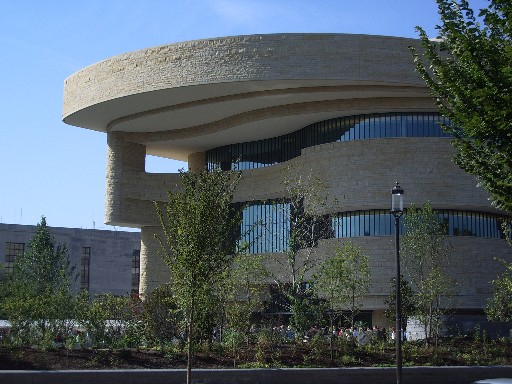 National Museum of the American Indian. (Image from the public domain.)

When the Washington Bullets basketball team renamed itself the Wizards, I thought that was an unnecessary reaction to all the handgun violence in Washington, when the Bullets’ moniker and symbol represented an apt aspiration to having a team that nonviolently was bullet-fast, bullet-accurate, and bullet-powerful.

On the other hand, I have stayed away from the Washington football franchise, due to its names — Redskins and Skins — that I find so dehumanizing.

Bravo to the Spokane Indians minor league baseball team for turning to the Spokane Tribe of Indians to accomplish "a cultural feat that has been lost on the Cleveland Indians, the Washington Redskins and the University of Illinois." "The tribe responded by thanking the team for the respect shown by not doing what other sports teams do with Native Americans caricatures and design. Then, the tribe added they would prefer to create a production hand in hand with the team."

Thanks to the Chicago Sun-Times for this article, and to Native Headline News for posting it. Jon Katz.