Would a Virginia bar kick out Virtus if pastie-less? 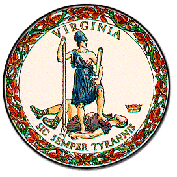 Virginia’s above-displayed seal shows a half bare-breasted Virtus. under current Virginia law, if Virtus walked into a Virginia bar, she would either be required to cover up with pasties or something more modest, or to leave.

A Virginia law that took effect this year provides for the suspension or revocation of a liquor license where one finds “entertainment of an obscene nature, entertainment commonly called stripteasing, topless entertaining, or entertainment that has employees who are not clad both above and below the waist or (ii) [ ] employees who solicit the sale of alcoholic beverages. The provisions of clause (i) shall not apply to persons operating theaters, concert halls, art centers, museums, or similar establishments that are devoted primarily to the arts or theatrical performances, when the performances that are presented are expressing matters of serious literary, artistic, scientific, or political value.” Va. Code § 4.1-226 (emphasis added).

What was I saying? Perhaps Virtus can avoid being forced into pasties due to her story’s serious political value.  Va. Code § 4.1-226(2). Did you hear that, Virginia exotic cabaret owners? Why not try overcoming this general breast ban by starting onstage dressed as Virtus, and then disrobe, to dramatize the very real and human side of Virtus? Reserve your www.eyeoftheVirtus.com domain today.

Unfortunately, a 1991 Fourth Circuit case does not buy the argument that women should be able to bare their breasts as much as men are permitted in public. United States v. Biocic, 928 F.2d 112 (4th Cir. 1991). Fortunately, the concurring judge in Biocic indicated that he only signed onto the opinion because he felt bound by precedent here. Id. at 118.

For a few months this year, numerous Virginia liquor-licensed establishments stopped requiring pasties after a federal court ruling finding Virginia’s anti-nutidy statute to be unconstitutionally vague, in violation of the First Amendment. Norfolk 302, LLC v. Vassar, 524 F. Supp. 2d 728 (E.D. Va. Nov. 21, 2007). However, as if without better things to do, Virginia’s legislature passed a new law a few months later (Va. Code § 4.1-226) that better specifies what is meant by topless dancing, so as to intimidate establishment owners to require that pasties be worn. Jon Katz

ADDENDUM: Thanks to my brother lawyer Marc Randazza, for giving exposure to Virtus’s bared breast.