Virginia federal criminal lawyer Jon Katz has been defending misdemeanor, felony and DUI clients charged in the United States District Court in Alexandria, Virginia, which is thirteen miles from Jon’s Fairfax, Virginia office. The Alexandria federal courthouse should not be mistaken with the Alexandria City state-level courthouse around two miles away, where Jon also practices. 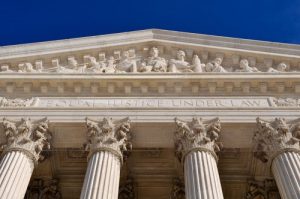 As a Virginia criminal lawyer, Jon Katz knows that given their druthers, prosecutors would prefer prosecuting terrorism cases and a slew of other cases in Alexandria federal court versus the nearby courts in Washington, D.C., and Maryland. The jury pool for the Alexandria federal trial court brims with more prosecutorial- and police-friendly jurors than in those other courthouses.

This courthouse runs a rocket docket, where both criminal and civil cases are quickly resolved, whether the parties like it or not.

Virginia criminal lawyer advises that this is a formal courthouse

This is a formal courthouse, often too formal, where lawyers are restricted to the podium when speaking to jurors and examining witnesses. The judicial branch is the most undemocratic of the three branches of government to begin with, and we do not need people charged with such minor offenses as speeding (still jail-able up to six months if stopped on the George Washington Parkway) to have their first visit to court be so overly formal.

For misdemeanor cases, the first court date typically is a Rule 5 hearing/initial appearance, where the presence of the defendant is required, even if represented by an attorney and even if the defendant lives far away, unless excused by the court.

Virginia criminal lawyer/ Fairfax DUI attorney Jonathan L. Katz has defended in federal court since 1999. To discuss your case with Jon, please call his staff to schedule a confidential appointment, at 703-383-1100.