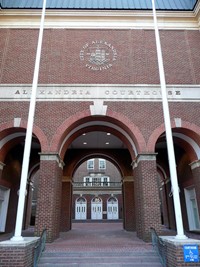 The city's population includes plenty of government employees and people of wealth, and its jurors are generally not likely to start off as skeptical of police, prosecutors and their functions. Routinely in Circuit Court, criminal defendants opt for bench trials rather than jury trials in this courthouse.

Alexandria General District Court misdemeanor and DWI cases start off with an arraignment date soon after the incident date. As with most Virginia counties, a defendant can avoid attending the arraignment by in advance hiring a lawyer who enters an appearance in the case. Before the arraignment date, the defendant's lawyer can check with the prosecutor's office to agree on a trial date. If an agreed trial date cannot be reached, the matter may be addressed with the judge.

Commonly the first trial date can be continued on that date in General District Court.

Non-lawyers may not bring cellphones into the Alexandria, Virginia courthouse

The courthouse can be reached by car, the Metro (taking a pleasant walk from the King Street Metro stop), and bus. If taking the Capital Beltway to the courthouse, take the local lanes or else you will miss the exits to the courthouse.

Virginia criminal lawyer Jonathan L. Katz pursues your best defense in Alexandria City and beyond, against felony, misdemeanor & DUI prosecutions. Call 703-383-1100 for a free consultation and action plan with Jon Katz about your court-pending criminal or DWI case.