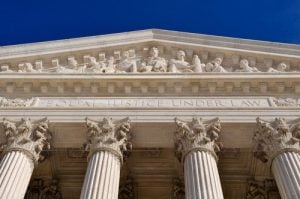 Federal criminal defense lawyer Jonathan L. Katz has been defending his clients' liberty in court since 1991. Jon mainly appears in the state-level courthouses of Virginia -- including Fairfax County, Prince William, Arlington and Loudoun -- because more criminal cases are prosecuted in state court than federal court. At the same time, Jon also defends in federal court, because he believes in defending in any battlefield where his clients need help.

Federal criminal defendants need to know the particularly high quality of most federal prosecutors and many federal law enforcement agents, together with the particularly draconian pretrial bail and sentencing schemes in the federal felony law. Jon Katz will pursue your best defense in this and every courthouse where he appears.

With the many federal agencies and parks in the capital area, all the more misdemeanor defendants in this region find themselves charged in federal court. Jon Katz repeatedly defends such cases in the Alexandria, Virginia federal trial court.

Federal felony cases often begin with law enforcement efforts to speak with suspects before any criminal charges have been filed. Jon Katz urges that it is both critical for criminal suspects to assert their right to remain silent under the Constitution’s Fifth Amendment, to have a federal criminal lawyer advocating for them early on to work to avoid a prosecution in the first place, and to minimize being behind the eight-ball in defending against federal felony charges.

An initial misdemeanor hearing date in federal court often is not the trial, but rather an initial appearance date, also known as a Rule 5 hearing under the Federal Rules of Criminal Procedure. Not going to one's initial appearance date with a qualified lawyer can put a federal criminal defendant behind the eight-ball on such matters as arguing for the most favorable pretrial release conditions.

Of course, if a defendant is unable to afford to pay for a retained lawyer, s/he may ask the court to provide the defendant with a court-appointed or public defender lawyer. Whether or not the court grants such a request depends on the defendant's assets and income.