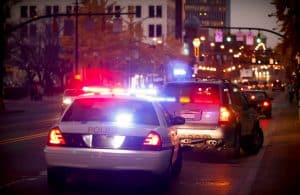 Fleeing from police might cross a criminal suspect’s mind. However, as a Fairfax criminal lawyer, I know that disregarding law enforcement officer commands to stop can lead not only to serious criminal and sentencing liability, but to adverse consequences with such collateral matters as security clearances and immigration status.

Virginia fleeing statutes applying to cars, boats, and walking or running away

Virginia has separate statutes covering fleeing the police by motor vehicle, boat or simply walking or running away.

The commonwealth’s automobile fleeing statute provides that: “Any person who, having received a visible or audible signal from any law-enforcement officer to bring his motor vehicle to a stop, drives such motor vehicle in a willful and wanton disregard of such signal or who attempts to escape or elude such law-enforcement officer whether on foot, in the vehicle, or by any other means, is guilty of a Class 2 misdemeanor. It shall be an affirmative defense to a charge of a violation of this subsection if the defendant shows he reasonably believed he was being pursued by a person other than a law-enforcement officer.” Va. Code § 46.2-817(A).  When such allegedly willful and wanton behavior “interfere[s] e with or endanger[s] the operation of the law-enforcement vehicle or endanger a person is guilty of a Class 6 felony.” Va. Code § 46.2-817(B).

Defenses against prosecutions for disregarding police commands to stop

The first defense against a prosecution for fleeing from police commands to stop is to have remained silent in the first place, not only because remaining silent with police is one’s right and is vital for many reasons, but also because a criminal defendant’s admission that he knew the police were pursuing him, or why the suspect did not stop, meets at least one of the elements that is the burden of the prosecutor to try to prove beyond a reasonable doubt.

Whether a person is fleeing from police commands to stop also goes to the defendant’s intent. For instance, a police officer might conclude that a driver is intending to elude the police officer by continuing to drive, when the driver instead is turning onto a less actively traveled roadway or parking lot so as not to impede traffic or not to cause a collision. The better practice is to stop one’s car once s/he sees police lights or sirens or other signal to stop.

Defending against the statute’s wanton and willful clause

“[W]illfulness and wantonness convey the idea of purpose or design, actual or constructive․ [T]hey are used to signify a higher degree of neglect than gross negligence… This definition requires a showing of recklessness plus additional culpability. Bazemore v. Commonwealth of Virginia, 42, Va. App. 203, 222 (2004).

The affirmative defense against a disregarding police prosecution

Virginia’s motor vehicle fleeing statute provides that: “It shall be an affirmative defense to a charge of a violation of this subsection if the defendant shows he reasonably believed he was being pursued by a person other than a law-enforcement officer.” Va. Code § 46.2-817. Unfortunately, in this day and age, there exist law enforcement impersonators, and reasonable belief that the pursuer is not a law enforcement officer is an affirmative defense, even though not defense that always will win.

Fairfax criminal lawyer Jonathan L. Katz pursues your best defense against felony, misdemeanor and DUI prosecutions. For a free consultation with Jon Katz about your court-pending criminal case, please call his staff at 703-383-1100 to schedule a confidential consultation.