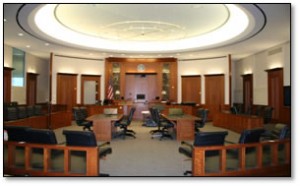 The General District Court judges for Fairfax County, Virginia are the same judges who sit in Herndon. The Town has its own private practice lawyer, currently E. Kate Fitzgerald, to prosecute misdemeanors, DWI/DUI cases and traffic offenses. Said cases are prosecuted at the Herndon Town Hall, at 777 Lynn St, Herndon, VA 20170.

Any filing of documents in a Herndon case can be effectuated at the Fairfax County General District Court clerk’s office, at 4110 Chain Bridge Road, Fairfax, Virginia 22030.

The Herndon Town Hall has plenty of parking, including on its open surface parking lot adjacent to the Herndon town hall.

Don’t let the Town of Herndon’s smallness nor downtown Mayberry-ish appearance fool you about its aggressive police force and prosecutor, which pretty much describes the police and prosecutorial approach in all of Virginia, which very much is a law and order state whose ongoing push for a strict criminal justice system is exemplified by the Commonwealth’s ongoing maintenance and use of capital punishment.

Those charged with crimes in Herndon or anywhere else in Virginia should obtain a qualified lawyer to fully defend them. A criminal conviction not only threatens one’s liberty, but also can affect one’s reputation, employment prospects, security clearance status, and immigration status.

Fairfax, Virginia, criminal/ DUI lawyer Jonathan L. Katz has been defending in nearby Herndon for years. To discuss your case with Jon, please call his staff at 703-383-1100 to schedule a confidential consultation.