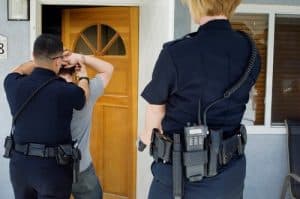 Police misconduct needs to be publicized. As a Fairfax, Virginia, criminal lawyer, I know that letting police abuse remain in the shadows will perpetuate such abuse. Bringing it to the light of day enables public scrutiny to reduce police misconduct.

Thanks to Edward and Audrey Cramer, and their lawyer Alexander Lindsay, for bringing to the public’s attention the nightmare they suffered after they called their home insurer Nationwide about damage on their property from a neighbor’s fallen tree.  Instead of helping the Cramers get their damaged home back to where it was before, the visiting Nationwide adjuster reported them to the police for hibiscus plants on their property, mistaking them as marijuana. Not only are hibiscus plants legal, but they are sufficiently distinguishable from marijuana (compare these hibiscus and marijuana plant photos) that this foible should never have been made.

Instead of recognizing that the Nationwide adjuster’s report was a non-starter, the Buffalo Township (Pennsylvania) police obtained and executed a search warrant on the Cramers’ home. According to Audrey Cramer, the police took her out of the home and into a police car wearing only underwear, a top covering her bra, and no shoes, refusing to let her put on pants and shoes. When her husband Edward arrived, they put him in the police cruiser as well, making both of them wait there for several hours during the search.

Police are not omniscient, and blundered by not letting Edward Cramer show them that they only had evidence of hibiscus plants, not marijuana

Edward Cramer asserts that police ignored Edward’s offer to show that the plants were only hibiscus and not marijuana.

By the time the police recognized they had no criminal case, the Cramers’ home was damaged from a very thorough police search. After having time to try to repair this public relations gaffe, Nationwide instead several weeks later sent the Cramers a threat to cancel their homeowners insurance if they did not remove the non-existent marijuana plants.

Excessive police heavy-handedness of this and other varieties is too common, and the Cramers have done the public a favor by revealing the police misconduct they suffered.

Fairfax/ Arlington, Virginia criminal lawyer Jonathan L. Katz stands up for the rights of all criminally accused, no matter how innocent or not they may be, and pursuing as much victory as possible for all. To discuss your case with Jon, please call his staff to schedule a confidential appointment, at 703-383-1100.