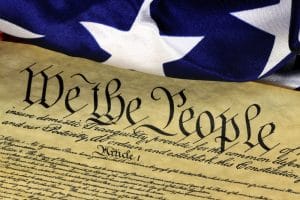 Nicole Wittmann — as of October 31 the interim Loudoun County commonwealth’s attorney — is the Republican contender to replace now-former chief prosecutor Jim Plowman, who will join the Circuit Court bench. As a Fairfax criminal lawyer, I know that this race in the adjacent county to me has been contentious between her and Democrat Buta Biberaj. At the same time, as interim chief prosecutor, Ms. Wittmann disserves the public and criminal defendants with her following distorted words about criminal defendants and criminal defense lawyers.

Does Nicole Wittmann want to delete the Sixth Amendment and the presumption of innocence?

Nicole Wittmann’s Facebook campaign page on October 17, 2019 says, in its entirety: “I had a great morning at Sugar Shack Donuts speaking to voters about why I’m the only qualified candidate to lead the Loudoun County Commonwealth’s Attorney’s Office. I’m the only candidate with twenty-six years of prosecution experience and I have spent my entire career in public service. My opponent makes her living by defending criminals and suing the police. Thank you to the Greason’s for hosting this meet and greet! #publicsafetynotpolitics” (Emphasis added.)

Ms. Wittmann’s Facebook campaign page reiterates on October 29, in a display image, that: “Buta Biberaj’s experience comes from defending criminals…” Her sweeping reference to defending criminals consequently lumps in people charged with such minor crimes as marijuana possession and a first-time low BAC DUI, together with people charged with serious felonies.  As interim chief county prosecutor, Ms. Wittmann is a public servant who is supposed to be serving the entire public, meaning not only actual and alleged crime victims, but also criminal defendants (at the very least by seeking justice and not merely convictions) and the public at large.

My Facebook reply to Ms. Wittmann’s October 17 posting says in main part: “More correct is to say that criminal defendants are presumed innocent unless and until proven guilty beyond a reasonable doubt. If people are going to be prosecuted, they are entitled under the Sixth Amendment to effective assistance of a lawyer….Police are not above the law. When police abuse their authority, the victims of that abuse are entitled to pursue legal relief and to hire a lawyer to do so.”

Ms. Wittmann cannot fix her calling the accused “criminals” and attacking lawyers for suing police for law enforcement wrongs in any way other than correcting and explaining her statements. To do otherwise will be a double standard in the light of her attacks on Ms. Biberaj that the Democratic candidate lies, for instance, by calling herself a former judge (Ms. Biberaj was a substitute District Court judge for several years) and by claiming that she prosecuted a slew of cases, when including civil and criminal defense cases in the mix.

It is possible that my foregoing Facebook reply to Ms. Wittmann’s posting about “criminals” will get deleted, just as my tactful comment (and another Northern Virginia lawyer’s tactful comment) about her October 29, 2019, posting about Ms. Biberaj’s funding sources got deleted. First, if Ms. Wittmann wants to be a transparent candidate, she might want to think twice about engaging in such deletions, and might at least consider adding a clear Facebook posting that comments are subject to deletion.

Second, her campaign’s practice of engaging in such deletions flies in the face of the First Amendment caselaw barring public officials (and Ms. Wittmann uses her campaign Facebook page as a public official, not only as a candidate) from blocking individuals from viewing and commenting on their social media pages where, as here, they are public fora. Davison v. Randall,912 F.3d 666 (4th Cir., 2019); Knight Institute v. Trump, 928 F.3d 226 (2nd Cir. 2019).