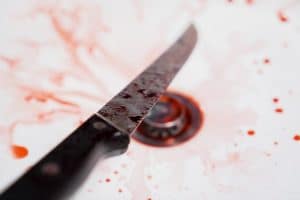 Aggravated assault is an apt phrase for characterizing Virginia’s malicious wounding statute. As a Fairfax criminal lawyer, I read with a dropped jaw at Lennis McNair, Jr.’s ability to convince a judge to sentence him only to three months active jail time, despite being convicted of stabbing a woman after telling the injured person’s mother that she “got what she deserved for trying to rob and cut him,” and having caused severe bleeding to the woman’s head, and severe lacerations to her head, hand and wrist. McNair v. Commonwealth of Virginia, Record No. 1299-19-1 (Va. App., Oct. 20, 2020) (unpublished).

Trial in this aggravated assault case was a he-said / she-said free fall. where the Virginia Circuit Court judge, sitting without a jury, heard the alleged victim recount that Defendant — while the alleged victim was on crack cocaine / cocaine base and alcohol — gave her $20 to help him move, punched her, and grabbed the $20 back,  only for the alleged victim to stay and further help, wanting to re-earn the $20. McNair then allegedly held a knife up to her, called his girlfriend to say he was going to kill the woman, and told his girlfriend to be ready to bail him out of jail. McNair waived his Fifth Amendment right to remain silent and presented a totally different version of events, which was that he was with the woman, two men came to rob him, she pulled out a knife (apparently to assist the robbery), he successfully struggled for the knife, and in the process of the struggle she sustained the reported cuts.

Thankfully for McNair, the “trial court found that Galloway’s version of events was incredible and credited appellant’s testimony that an attempted robbery occurred. However, the trial court stated that it did ‘not believe that these injuries to . . . Ms. Galloway could have occurred while they were struggling over a knife.’ Rather, it found that appellant was ‘irate in a sense’ and ‘in a fit of rage, continued to assault and stab and cut Ms. Galloway” in retaliation after gaining control of the knife. The trial court reasoned that because appellant continued to stab Galloway after she was no longer a threat, self-defense did not apply.'” Considering that the judge ended up only sentencing McNair to three months of active jail time — despite the severe injuries — and four years and nine months of suspended jail, it seems that the judge recognized that the felony aggravated assault conviction by itself was enough to haunt McNair for the rest of his life. Had the judge believed the alleged victim, he could have found McNair guilty of attempted murder and Class 3 felony malicious wounding , rather than the Class 6 result that he got, as described further below.

Here is Virginia’s definition of aggravated assault / malicious wounding: “If any person maliciously shoot, stab, cut, or wound any person or by any means cause him bodily injury, with the intent to maim, disfigure, disable, or kill, he shall, except where it is otherwise provided, be guilty of a Class 3 felony. If such act be done unlawfully but not maliciously, with the intent aforesaid, the offender shall be guilty of a Class 6 felony.” Virginia Code § 18.2-51 .  In finding McNair guilty of Class 6 malicious wounding, the trial judge found such intent, but no malice.