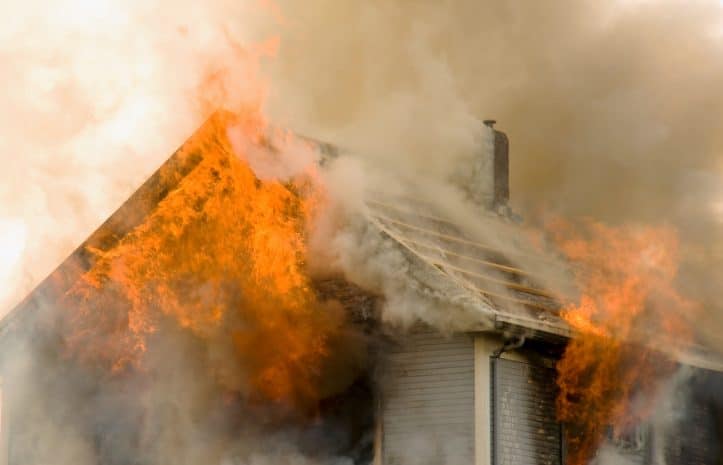 Arson investigations typically include firefighters and police. As a Fairfax criminal lawyer, I repeatedly analyze how the Fourth Amendment applies not only to police, but also to all other relevant government personnel, including fire fighters and government-employed emergency medical technicians (EMT’s) / paramedics. Amidst horrifying facts, this week the Virginia Court of Appeals affirmed all counts of a conviction for arson and first degree murder that followed firefighters’ discovery of the charred corpse of the defendant’s wife at their marital home. Delano Grangruth v. Commonwealth of Virginia, Record No. 0401-21-1 (Va App. April 5, 2022) (unpublished).

Virginia police will pursue a resident of a house for possible arson where the smoke detector is found disabled, the house phone is cut off, and the air conditioner is on

In Grangroth’s case, firefighters came to his home when a home health care worker reported no response to her daily home visit and smelling smoke. Firefighters found the remains of a house fire and the burnt corpse of the defendant’s wife in a chair. Firefighters ventilated the home, searched for further occupants, and found none. Soon after the house ventilation finished, police “learned that [Grangruth]  was normally at the residence every day. Concerned that the firefighters may have overlooked the husband’s presence in the house, Squyres performed his own walk through once the firefighters deemed the property safe to enter.” The police found a “nine-volt battery on the carpet just below the smoke detector,” a disconnected home landline phone system, and a running air conditioner, which taken together supported that this was arson with the intention of avoiding notice of the fire and preventing the defendant’s wife from calling for help. Grangruth.

Why do so many criminal suspects confess to police?

Police ultimately found Grangruth at a fast food restaurant, where they arrested him. After Grangruth was Mirandized, agreed to speak, asked for a lawyer, but again agreed to speak with police and confessed to murder and arson. “After signing a legal rights advice form, [Grangruth] confessed to pouring gasoline on his wife and setting her on fire. The confession was recorded and transcribed.” Grangruth. Had Grangruth not waived his right to remain silent, he may have avoided getting convicted. However, as a Virginia criminal lawyer, I regularly learn of criminal defendants who fall on their swords by wagging their tongues with police.

What Fourth Amendment rights did Grangruth have against the initial warrantless police entry into his burnt home?

The Virginia Court of Appeals rejected Grangruth’s complaint about the warrantless police entry into his home that followed the fire department’s entry into and ventilation of his home during its arson investigation, finding the absence of a violation of any Fourth Amendment reasonable expectation of privacy by Grangruth. Grangruth underlines that “‘invasion of privacy is not increased by an additional officer entering the residence'” and points out that the and that the “Fourth Amendment generally is not offended if ‘police officers merely followed in the footsteps of [a firefighter], who was authorized to enter the residence to fulfill his duties as a firefighter'” Grangruth (referencing Jones v. Commonwealth, 279 Va. 52, 59 (2010)). Importantly: ” This is not to say that a firefighter’s lawful presence in a premises destroys all expectations of privacy. Quite the contrary. See Clifford, 464 U.S. at 291-92; Tyler, 436 U.S. at 504. Rather, it is our recognition that all of the facts and circumstances present here rendered reasonable the actions of the government officials prior to the warrant being secured.” Grangruth.

Fairfax criminal lawyer Jonathan Katz pursues your best defense against Virginia DUI, felony and misdemeanor prosecutions. Find out the major difference that Jon Katz can make for your defense, by calling 703-383-1100 to schedule a free in-person consultation with Jon about your court-pending case.