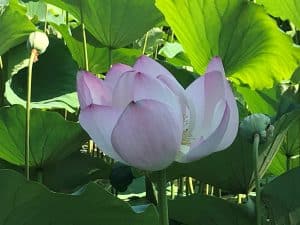 Benjamin Pang-jeng Lo was my greatest martial arts teacher. Recently, I learned that Ben passed away on October 12, 2018. He was ninety-one.

Benjamin Pang-jeng lo- A giant of a human being

Ben (here teaching t’ai chi ch’uan in the only YouTube video I have found with him) was an amazing man, not only for his being an extraordinary practitioner and teacher of taijiquan, but also for in the process being so generous of his time and humble in the process. This giant of a man and t’ai chi master always paid honor to his own teacher Cheng Man Ch’ing, and never sough adulation for himself. He recognized the gift he had received in learning t’ai chi from Professor Cheng, and excellently shared his teachings with thousands of students, and through writing on t’ai chi and translating key t’ai chi ch’uan texts.

Starting in 1995, I met Ben several times, during his occasional weekend classes in the Washington, D.C., area, arranged through local taijiquan teachers. I loved the man from the very beginning. In his presence, I got recharged about all the great heights that I can achieve in taijiquan and in the rest of his life. To summon back that great energy, all I need to do is to think of Ben.

Ben cared deeply about all his students. When I greeted him during a break in practice, he genuinely inquired about how my practice is going. He wanted his students to flourish, but of course without shortcuts. Doing even a half day of training with Ben Lo meant holding t’ai chi postures for so long that I did feel the burn in my knees. By our holding those postures, Master Lo got to check whether we were correctly holding the posture and offer suggestions at correcting them, and we strengthened ourselves for taijiquan all the more.

I chose the taiji/yin yang/scales of justice symbol for my law firm to always remind me to integrate the lessons, power, and optimism of taijiquan strength and harmony into my law practice. when I put that symbol on a clock that I shared with friends, clients and colleagues and sent one to Ben, he soon after that called to thank me. I wish I had been there to receive his call. He was a giant making fully clear to his students his confidence in their ability to reach great heights with their practice.

Ben enjoyed going to lunch at a local Chinese buffet restaurant. Somehow, on a few occasions I managed to snag a seat at his table. Nobody told me that there was a pecking order to do so. While I remember some specifics about what Ben discussed at lunch, including our talking about the trial lawyer (who knew Ben for decades) who first introduced me to taijiquan, what I took away most from Ben was his cheerful disposition, his deep commitment to teaching taijiquan, and the taijiquan lessons I learned from him and stay with me.

Ben was so sick when he met his physician Cheng Man Ch’ing, that he first needed to strengthen his body so that his prescribed medicine would be of any benefit. Professor Cheng was both a master of Chinese medicine and a t’ai chi ch’uan master, and advised Ben to strengthen his body with taijiquan. In his eighties, Ben asked his doctor why he had gotten a significant ailment that needed treatment, if he had become so strong through taijiquan. The doctor responded that if it had not been for taijiquan, Ben’s health situation could well have been much worse.

At Professor Cheng’s recommendation, Ben decades ago moved from Taiwan to San Francisco, becoming responsible for teaching many of today’s great taijiquan teachers, including my local teacher Julian Chu.

Some people live on more than others after they leave their bodies. Benjamin Pang-jeng Lo is one of them, in the way that he has inspired and touched the lives of so many people.

UPDATE I was fortunate to have joined the East Coast gathering honoring Ben Lo on November 10, 2018, at the Cabin John Park t’ai chi court.  Around fifty or more people were present to the point that the taiji court was so crowded that some of us had to stand outside the court to join in the taijiquan 37-posture form. We also pushed hands, and I had a great push hands round with a taijiquan teacher from Richmond, Virginia. Various people spoke, including those who first met Ben soon after his 1974 relocation to California from Taiwan. The consistent message about Ben from these speakers was what I had witnessed myself, that being his humility, honor to his teacher Cheng Man Ch;ing, devotion to taijiquan, and devotion to those practicing taijiquan.