Why is a well-prepared assault defense needed for one’s court date? Because as a Fairfax criminal lawyer, I know how damning is an assault conviction on one’s criminal record, and also the sentencing risks if convicted for assault. 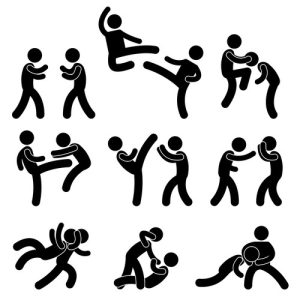 Getting involved in a fight is risky business in Virginia

At least when I was growing up as a youth, I received mixed messages about fighting. Teachers warned to keep our hands to ourselves, but peers taunted those who did not fight back when hit.

By the time we reach adulthood, we must do our best to stay out of fights. Of course, that does not mean not to be battle-ready. Learning martial arts is beneficial not only for self defense but also for improving one’s confidence, happiness, self-discipline, physical and mental fitness, and way of life.

In Virginia, a simple assault (versus aggravated assault)  “occurs when an assailant engages in an overt act intended to inflict bodily harm and has the present ability to inflict such harm or engages in an overt act intended to place the victim in fear or apprehension of bodily harm and creates such reasonable fear or apprehension in the victim.” Carter v. Virginia, 269 Va. 44, 47, 606 S.E.2d 839 (2005).

Nothing guarantees an acquittal on an assault defense

While self defense is a legal assault defense, nothing guarantees that a judge or jury will agree that the defendant acted in self defense. The law of self-defense “is the law of necessity, and the necessity relied upon must not arise out of defendant’s own misconduct. Accordingly, a defendant must reasonably fear death or serious bodily harm to himself at the hands of his victim.” McGhee v. Virginia, 219 Va. 560, 562, 248 S.E.2d 808 (1978).

Also, the law allows using force to defend one’s property and to defend others, using force on others always risks a conviction. Moreover, the law of self defense requires that the amount of force “was not excessive and was ‘reasonable in relation to the perceived threat.'” Couture v. Virginia, 51 Va.App. 239, 250, 656 S.E.2d 425 (2008).

Virginia law also allows defense of others as an assault defense: The “law pertaining to defense of others is that one may avail himself or herself of the defense only where he or she reasonably believes, based on the attendant circumstances, that the person defended is without fault in provoking the fray.” Foster v. Virginia, 13 Va.App. 380, 386, 412 S.E.2d 198 (1991).

Virginia law also allows force to protect property, to an extent: “’When it is said that a man may rightfully use as much force as is necessary for the protection of his person and property, it should be recollected that this rule is subject to this most important modification, that he shall not, except in extreme cases, endanger human life or do great bodily harm.'” Alexander v. Virginia,  260 Va. 238, 241, 531 S.E.2d 567 (2000).

From a practical standpoint beyond the law, some people feel it important to pre-emptively assault another or to disproportionately pummel an assailant, for such reasons as getting the word out not to mess with the person. Neither squares with the law.

Fairfax criminal lawyer Jon Katz since 1991 has delivered successful assault defense and defense in other misdemeanor and felony cases, totalling in the thousands. To discuss your case with Jon in confidence, please call his staff at 703-383-1100.