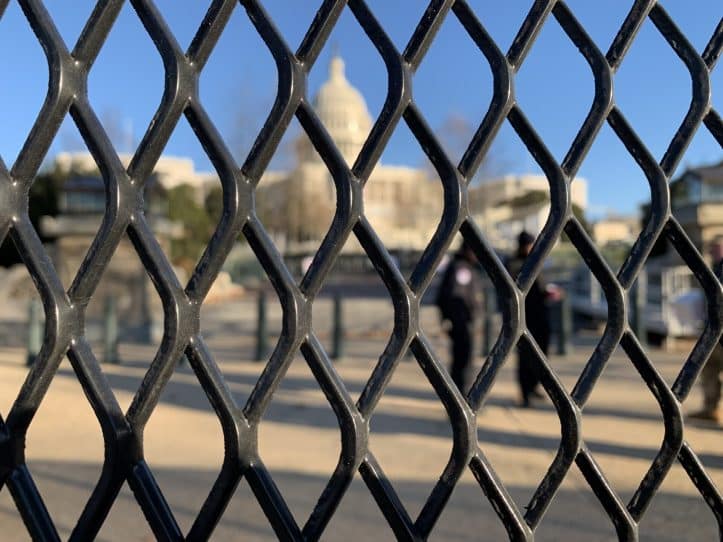 Inauguration 2021 week will bring more security to the nation’s capital than any previous presidential swearing in, related to the January 6 riotous break-in of the nation’s Capitol. As a Fairfax criminal lawyer, I know that my county’s courthouse will remain open during the presidential transition, but that the neighboring Arlington County courthouse will remain shuttered until reopening the day after the ceremony. Until learning of the court closure, I did not blog about the Capitol break-in, because I do not have much more to add to the discussion than what has already been said, other than that the break in must not be used as an excuse to dilute any criminal defendants’ rights nor rights peacefully to protest. The photo accompanying today’s blog entry is from my visit to the Capitol neighborhood the weekend after the break in.

Arrive earlier than usual to the Fairfax courthouse during inauguration week

As of now, the Fairfax courthouse — whose rear entrance is fifty yards from my office — will remain open during inauguration week. Nonetheless, in case of enhanced courthouse security during that week, I suggest arriving to court earlier than otherwise during the week of January 18 to offset any resulting slower security line at the courthouse entrance. The Fairfax chief Circuit Court judge on January 15 said that law enforcement is “monitoring the situation including monitoring social media sites to see if any direct threat to our courthouse exists. No known direct threat to our courthouse has been discovered.” The chief judge’s announcement was made “in light of reports of possible civil unrest across the country.”

What if I do not feel comfortable being in the Fairfax courthouse during inauguration week?

The Fairfax Circuit Court chief judge’s announcement also says: “At this point we will liberally grant continuance of cases for those who might feel uncomfortable coming to the courthouse next week so long as that does not result in an injustice to any party to a case. Other than that, our dockets will proceed as they usually do.” What constitutes “an injustice to any party to a case”? If the prosecutor were to obtain a trial date continuance because his or her witness asserts feeling uncomfortable coming to the courthouse, my clients can incur an injustice as to their speedy trial rights, if they are missing work by coming to court, and if they have already secured the presence of witnesses for their inauguration week court date.

If my Fairfax criminal defense client tells me s/he is uncomfortable coming to the courthouse during inauguration week, I will tell them that the judge’s announcement is not an automatic pass for them not to come to court, and that it is ideal for me to be able to set a hearing date prior to my client’s court date to request such relief. Fairfax criminal defendants without lawyers are not going to automatically know whether their request to be excused from the courthouse will be granted.

While non-incarcerated people are getting liberal granting not to come to the Fairfax courthouse during inauguration week, inmates at the adjoining jail have no choice but to be right next to the court building whether or not unrest comes to the neighborhood. Ordinarily, inmates do not want continuances if doing otherwise is likely to have them incarcerated for a shorter period of time.

Why is a Fairfax-neighboring courthouse closed for all but two days of this coming week?

All courts already are closed for the January 18 Martin Luther King, Jr. federal holiday. The nation’s capital already is a fortress for the days leading up to the inauguration, with most if not all of the National Mall already closed off, and with more than 20,000 national guard members supplementing non-military law enforcement. Furthermore, the Washington Post on January 15 reported that: “Virginia will shut down four major bridges leading into downtown D.C. ahead of Inauguration Day,” which will cover January 19, 2021. Arlington County chief Circuit Court Judge William Newman announced on January 15 that his courthouse will remain closed inauguration day and reopen the day after. Circuit Court Judge Newman’s order references potential safety threats in the courthouse area, and says that the county’s law enforcement assistance has been sought in securing bridges leading into the capital and in preparation of the presidential swearing in. Judge Newman’s order references the statutory judicial emergency law to extend filing deadlines that fall on the days the courthouse is being closed for the emergency. Virginia Code § 17.1-330.

What are the remaining disadvantages for a Virginia criminal defendant from a closed courthouse?

It is bad enough when a Virginia criminal defendant is arrested on a Friday and has to wait until the following Monday to ask a judge to be released pretrial (and then often being told to file a motion for a bond hearing for another day), if the Magistrate has set a no bond status. More challenging to such defendants is having a courthouse that will be closed for five calendar days as a result of the emergency declared in relation to the presidential inauguration.