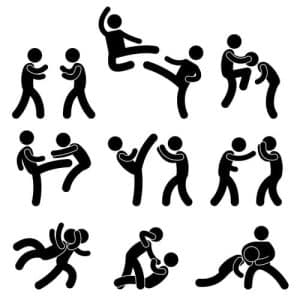 Martial arts practice can be prosecuted if intended to be used for civil disturbance, says Fairfax criminal lawyer

Martial arts practice that can cause injury or death can be prosecuted in Virginia as a felony, if intended for a civil disturbance.  Va. Code § 18.2-433.2 (“Martial Arts Law” or “MAL”), As a Fairfax criminal lawyer, I read with interest a recent article overstating the reach of the MAL, but at least alerts such practitioners to the MAL, in addressing a proposed MAL amendment that addresses designated weapons but not such arts.

What does the foregoing “civil disorder” phrase mean in the Martial Arts Law? A “civil disorder” “means any public disturbance within the United States or any territorial possessions thereof involving acts of violence by assemblages of three or more persons, which causes an immediate danger of or results in damage or injury to the property or person of any other individual.” Va. Code § 18.2-433.1

The meaning of the Commonwealth’s MAL

The MAL also covers the above-referenced activities when used with a “firearm, explosive or incendiary device.” In referencing “technique[s] capable of causing injury or death”, reasonably read the MAL includes martial arts, including karate, taekwondo, judo, jiu jitsu, and taijiquan / t’ai chi ch’uan. As a longtime taijiquan marital arts practitioner, the MAL interests me all the more both as a Fairfax criminal lawyer and as a practitioner of this defensive art.

When police arrest a person for using weapons or martial arts in alleged paramilitary activity, they are likely going to ask the defendant for names of people who taught them such weapons or arts use, and whom they practiced with. Unfortunately, with the broad language of the MAL , police may well next proceed to bring criminal charges against those people even without specific information to show that said teacher or fellow practitioner had any idea to know that the defendant would engage in paramilitary activity.

Consequently, teachers and practitioners of martial arts and applicable weaponry will be wise to be careful about whom they teach and with whom they practice.