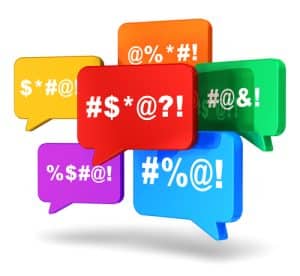 Virginia criminal lawyer on winning through openness, embracing all, and eliminating negative words

Negative words are a downward spiral. We know that already, but negative words permeate daily dialogue, starting with car stereos blasting F-bombs and proceeding with referencing others as sex organs, and calling others choice names. As a Fairfax criminal attorney, I know that high vibrations, unblocking and zero limits are always the way to go. The temptation to spew negative words, though, merits reminders why it is best to remain on the positive path.

Fairfax criminal attorney on the dogsh*t of negative words

Spewing negative words is like stepping in dogsh*t. The smell follows the person who steps in it, it is uniquely disgusting, and the dogsh*t needs to dry before it will come off one’s shoes that the wearer must suffer with until arriving home or to a shoe store to wear a replacement pair.

Recently in court, I felt tempted once again to direct some well-selected words to a prosecutor who comes across as being very arrogant, but I recognize that instead his words may be more the function of habit, and I often obtain good results with him in working out discovery orders, trial reschedulings, and settlement negotiations. Once again, I resisted the temptation to say anything negative to him, answered his grumbling questions with softball answers, and left the motions hearing with precisely what I wanted.

Virginia criminal attorney underlines that most of us are sisters and brothers, all coming from the same source

Nobody I know is going to call Hitler, Eichmann or numerous other monstrous people their brothers or sisters. Nonetheless, all humans come from the same source, and most of us are in fact sisters and brothers. Unless we have low self esteem, we are not going to berate our favorite humans, so should think twice before berating anyone else, which can be damagingly dualistic.

Certainly, some people test our faith in humanity. I marveled when an audience member asked Ram Dass in 2003 (with Gulf War II being rather new) about George W. Bush, and instead of berating him, Ram Dass opined that Bush was going through a difficult reincarnation.

Avoiding negative words does not mean not battling with full strength

Avoiding negative words does not men not battling with full strength and battle gear in court and beyond. Local teacher Joe Weston convincingly shows how we must certainly not avoid necessary confrontation, but that we can do so respectfully and without losing an ounce of strength.

As a criminal lawyer, I know that jurors, judges, prosecutors and everyone else is not likely to be any more open to me than I am to them when I am making efforts to persuade them. Also, by being open, others are more willing to open up to us, and we hear better, both the words that are said and unsaid, while also being sensitive and hearing to the body language and internal processes of others.

Negative words and negative thinking are dualistic, counterproductive, and energy-draining. Focusing on winning, success, and persuading is invigorating, creativity-inspiring, and energizing. This is the opposite of superficiality. This is about winning.

Fairfax criminal lawyer Jonathan L. Katz focuses on winning advocacy at every turn, for the best possible results in court. Jon will be delighted to discuss your case with you, through a confidential consultation scheduled through his staff, at 703-383-1100.