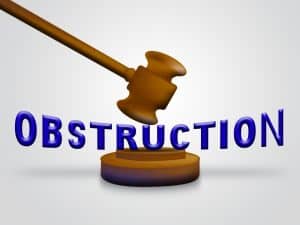 Obstruction of justice is among the least desirable Virginia Class 1 misdemeanor to be convicted of, versus the less serious-sounding crimes of disorderly conduct or trespassing. As a Fairfax criminal lawyer, I know that charges of obstruction of justice and disorderly conduct can be catch-all accusations when police want to charge a crime but do not know what other crime(s) to charge. On July 16, 2019, the Virginia Court of Appeals confirmed that obstruction of justice is not committed by doing nothing more than telling police minor lies that briefly sidetrack them from their investigation at hand. Maldonado v. Virginia, ___ Va. App. ___ (2019).

Fairfax criminal lawyer on the definition of obstruction of justice

The Virginia Court of Appeals concluded that the above-referenced first prong of obstruction of justice under § 18.2-460(A) was not met: “Maldonado … initially falsely denied that [his son and suspect] Everardo was present in the home. While Maldonado’s actions resulted in a delay in the interview of Everardo of approximately forty minutes, the record does not reflect how this delay
constituted a significant impediment to the investigation.” Maldonado.

As a Fairfax criminal lawyer, I find Maldonado to be a good source for limiting obstruction of justice from being a runaway catchall criminal charge.

Fairfax criminal lawyer Jonathan L. Katz has successfully defended thousands of people charged with felony, misdemeanor and DUI offenses. To discuss your case with Jon Katz, please call his staff at 703-383-1100 to schedule a confidential consultation, which usually is free.