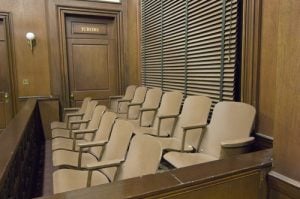 Penalty setting is an awesome power of jurors who convict criminal defendants in Virginia. As a Fairfax criminal defense lawyer, I know the awesome power that juries have not only in terms of determining guilt or innocence, but also with recommending sentences.

If a Virginia jury convicts a criminal defendant for a Class 1 misdemeanor or felony, proceedings then move on to a penalty trial, where the jury is directed to reach a unanimous decision about a recommended incarceration term and a recommended fine. The judge then decides in a separate final sentencing proceeding whether or not to suspend and/or reduce any of the jury’s recommended sentence. Unfortunately, under the present state of Virginia criminal law, the jury is not permitted to recommend suspending any of a criminal defendant’s sentence nor to impose any probation length with probation conditions, even for Class 4 and other particularly serious felonies whose non-mandatory sentencing ranges start at two year or more.

A Virginia Circuit Court criminal trial proceeds before a jury unless both the defense and prosecution agree to waive a jury.When the commonwealth declines to agree to a defense request for a non-jury trial, that can sometimes or often mean that the prosecution wants to pressure the criminal defendant into a guilty or no contest plea to avoid the uncertainty of a jury penalty phase, including in counties where jurors are more likely to harbor and act on racial prejudices against a defendant of a race different from theirs.

Even in the Northern Virginia counties having lower incidences of racism affecting juror decisions than in other parts of the commonwealth, jury penalty recommendations can sometimes be more risky than judge sentencing, starting with the knowledge that jurors will not be informed of Virginia’s voluntary sentencing guidelines ranges nor of typical sentencing ranges imposed by judges in the particular county in non-jury trials for similar criminal counts.

One of my trusted Virginia criminal defense colleagues recently commented that he prefers proceeding to trial before twelve potentially prejudiced felony jurors than one prejudiced judge. I think the decision is more complex than that both as to the guilt-innocence and penalty phases, but he makes a good point nonetheless.

Penalty ranges may not automatically be disclosed to potential jurors during jury selection / voir dire, under current Virginia criminal law. Recently-passed House of Delegates bill 100 — advocated heavily by Justice Forward Virginia — would reverse that situation. A similar bill — SB 325 — has passed the state Senate Courts of Justice committee, so should be proceeding for a full Senate vote.

Not being acted further upon this year is proposed Virginia legislation under SB 326 and HB 270 to permit jurors to make recommendations to suspend part or all of a convicted criminal defendant’s penalty, and to impose any probation period with terms and conditions connected thereto. Nonetheless this proposed 2020 legislation can be seeds that with watering might bloom into passed law in 2021.