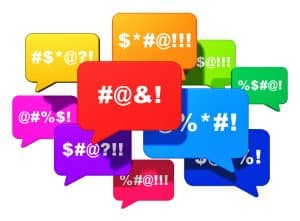 Profanity is prohibited by Virginia law in the following context: “If any person profanely curses or swears or is intoxicated in public, whether such intoxication results from alcohol, narcotic drug or other intoxicant or drug of whatever nature, he shall be deemed guilty of a Class 4 misdemeanor.” Va. Code § 18.2-388. As a Fairfax criminal lawyer, I know that profane language is also criminalized in the commonwealth when used for computer or phone harassment. Va. Code §§ 18.2-152.7:1 and 18.2-427.

The First Amendment limits the criminalization of speech

The foregoing Virginia laws barring profanity do not look compatible with the First Amendment to the United States Constitution. The United States Supreme Court only excludes a narrow universe of speech from First Amendment protection against criminal prosecution, including obscenity and child pornography. The Supreme Court also narrows the circumstances under which legal action may be successful for libel, defamation and slander. SCOTUS is reluctant to expand the universe of speech that receives reduced or no First Amendment protection.

Profanity will be cut from Virginia’s drunk in public law, effective July 1, 2020

Effective July 1, 2020, profane cursing will be cut from Virginia’s public intoxication law, leaving profanity only criminalized in the context of phone and computer harassment, as discussed above. This is all the more an important accomplishment when considering that the same effort got tabled in House committee in 2017. Moreover, it is astounding that 24 Virginia delegates voted against removing profane cursing from the public intoxication statute, compared to the 76 House members voting in favor of the measure. In the Senate, only one member voted against this amendment.

This removal of profane cursing is not retroactive

Prosecutorial use of the defendant’s language in disorderly conduct prosecutions

In Virginia, words do not only get criminalized for the profanity and other alleged criminal law violations addressed above. Speech and expression also gets prosecuted in the context of alleged disorderly conduct and fighting words under the commonwealth’s disorderly conduct statute, and words and expression (for instance cross burning) used as threats of bodily harm.

Every time a police officer singles out a person for his or her First Amendment-protected speech or expression, and every time a prosecution arises from one’s speech or expression (whether as alleged profanity or other alleged act), the criminal defendant ideally will have a lawyer who is not only skilled in criminal defense but also who understands the applicable First Amendment defenses against such arrests and prosecutions.