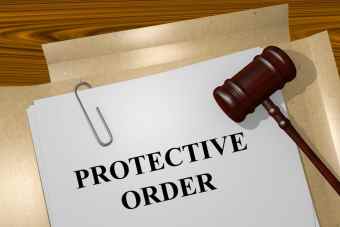 Protective order violations in Virginia are a criminal offense. As a Fairfax criminal lawyer, I think initial protective orders (“PO’s“) — both emergency and preliminary PO’s, which bar such behavior as contacting the respondent and assault  — are too often a threat to our civil liberties (for being issued on too low a standard of proof and ex parte). Moreover, Virginia protective orders too often bar the PO order subject from even having contact with his or her children who are household members of the PO applicant, because initial PO’s routinely add household members as beneficiaries of such orders.

Violating a domestic protective order is at least a Virginia misdemeanor, and becomes a felony with bodily injury

When a Virginia protective order has been issued against a family or household member (“domestic protective order”), violating the PO is a Virginia Class 1 misdemeanor, carrying up to one year in jail and a fine of up to $2,500.00. That violation can take place, for instance, by violating the PO’s bars against assault against and contacting the PO’s beneficiaries. When any Virginia assault involves bodily injury by the subject of the PO, the resulting crime is a Virginia Class 6 felony, carrying up to five years in prison and a fine of up to $2,500.00: Virginia Code § 16.1-253.2.

What does the Virginia PO bodily injury law say?

Absence of a visible wound does not automatically avoid a felony conviction for an alleged domestic protective order violation with allegedly accompanying bodily injury: “Considering those precedents construing the same statutory phrase, we hold that the plain, obvious, and broad meaning of ‘bodily injury’ in Code § 16.1-253.2(C) is any bodily damage, harm, hurt, or injury; or any impairment of a bodily function, mental faculty, or physical condition.” McGowan v. Virginia, ___ Va. App. ___ (Nov. 24, 2020). In McGowan, the defendant bit his son’s mother (the beneficiary of a domestic protective order) on her knee, she screamed, and McGown then left the son’s mother’s house. Because of pre-existing skin condition discoloration, it was not clear whether a visible wound was left from the biting. In affirming McGowan’s conviction for a P.O. violation with bodily injury, McGowan concludes:

“Here, the evidence, viewed in the light most favorable to the Commonwealth, demonstrated that L.M. screamed when appellant bit her, evidencing pain and hurt, and that L.M. allowed a police officer to document the location of that hurt within hours of the offense. In short, unlike in Chilton, the facts in the instant case show a bodily injury occurred as a result of appellant’s act of biting the victim in violation of Code § 16.1-253.2(C).”

What is the significance of Virginia’s bodily injury PO violation statute to Fairfax prosecutions?

As a Fairfax criminal lawyer, I know that the Fairfax County Commonwealth’s Attorney continues since the middle of this year to decline to participate in the prosecution of most misdemeanors other than DUI and some other selected misdemeanor allegations, including assault involving intimate partners. However, if a Virginia assault is charged as an alleged felony, as required by Virginia law, the county prosecutor’s office will be involved in the prosecution.